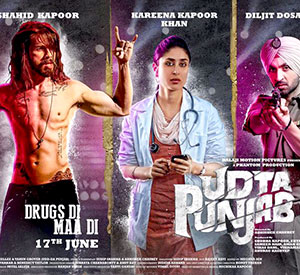 Of late, Bollywood has been witnessing a diverse genre of films that are making its way to the silver screen. After having witnessed the comical HOUSEFULL 3 and the mysterious whodunit TE3N, this week sees the release of UDTA PUNJAB, a film about the rampant drugs abuse problem in Punjab. Will UDTA PUNJAB get translated into ‘flying’ returns for its makers at the box-office or will it face gloom, let’s analyse.

UDTA PUNJAB starts off with a scene at the India-Pakistan border wherein a Pakistani man throws a mysterious drug packet onto the Indian side. This is followed by a ‘rocking’ introduction of the rockstar Tommy ‘Gabru’ Singh (Shahid Kapoor) and a glimpse into his ‘addictive’ lifestyle. One day, Tommy Singh gets fired by his producers for delaying their recordings. If that wasn’t enough, Tommy Singh also gets arrested by the Punjab police amidst his birthday party, on grounds of drug abuse. When he gets released from jail, despite the jitters, he somehow manages to gear up to perform before an eagerly awaiting audience. Just before the performance, he does something extremely awkward that irks a handful of audience, who, then, run after him for his blood. On the other hand, Pinky Kumari aka Mary Jane (Alia Bhatt) migrates from Uttar Pradesh to Punjab. Her background reveals that, she was an exceptional hockey player, who, because of lack of financial support, landed up becoming a labourer. And since then, she is trying to find her place under the sun in Punjab. One day, when she finds a 3 kg drug packet, she tries to sell it off to make a fast buck. While doing so, for reasons best known to her, she dumps the whole 3 kg of drugs into a well, thus invoking the wrath of the drug peddlers, for whom, the entire packet meant heavenly profits. Angered by her action, the peddlers not just land up raping the helpless Pinky Kumari, but also keep her as captive with them. Repeated attempts to run away from their clutches, yields no results for Pinky. The third angle to the story is that of Dr. Preet Sahani (Kareena Kapoor Khan), under whom Balli Singh, the younger brother of Inspector Sartaj Singh (Diljit Dosanjh) is getting treated for being a victim of drug overdose. Amidst the course of Balli’s treatment, Sartaj Singh analyses and realises the harm that these banned substances cause to people. He, then, joins Preet Sahani in her crusade against drugs and exposing the drug mafias.

Does the once-rockstar Tommy ‘Gabru’ Singh regain his lost identity, does Pinky Kumari become successful in escaping from the clutches of the dreaded drug peddlers, what happens when Tommy Singh and Pinky Kumari cross each other’s path, and does Dr.Preet Sahani and Inspector Sartaj Singh succeed in their crusade of exposing the drug mafias of Punjab, is what forms the rest of the film.

First things first – UDTA PUNJAB is a dark and serious film. Also the film’s screenplay (Sudip Sharma, Abhishek Chaubey) jumps through multiple stories at the same time making it complicated. Abhishek Chaubey, who gave a glimpse of his supreme directorial abilities with his previous films like ISHQIYA and DEDH ISHQIYA faces a challenge to narrate the dark story of UDTA PUNJAB and does manage to do so. As the film progresses however, it does seem to slip in parts, especially in the second half. In an attempt to narrate multiple parallel stories, Abhishek Chaubey struggles to keep it engaging in the latter half of the film.

As for the performances, it is the biggest of USP of UDTA PUNJAB. One has to give it to the actors to take up such challenging parts which are completely out of their comfort zone. Shahid Kapoor and his never-before-attempted ‘rockstar’ look had created a huge buzz, curiosity and excitement amongst his fans. He manages to pull off his role well while bringing in much needed humour in this otherwise serious film. He is strongly supported by the talented Satish Kaushik in the film. Alia Bhatt, on the other hand, goes totally de-glam for her role. She for sure has tried her best to portray a Bihari character in the film and does complete justice to her part. Kareena Kapoor Khan is good in her part. UDTA PUNJAB also sees the presence of Punjabi star Diljit Dosanjh, who makes an impressive debut in Bollywood. If UDTA PUNJAB is a mere glimpse of what he is capable of, then Diljit is definitely a name to watch out for in Bollywood. Rest of the actors help the film move forward.

The film does have its share of decent music (Amit Trivedi) with a couple of hummable tracks like ‘Chitta Ve’ and ‘Ikk Kudi’, though one feels that a stronger music album could have helped the film. On the other hand, the film’s background score (Benedict Taylor, Naren Chandavarkar) is impressive and helps the film’s narrative.

The film’s dialogues (Sudip Sharma) are mainly in Punjabi and audiences who don’t speak the language may find a bit of disconnect. While the film’s cinematography (Rajeev Ravi) is average, the film’s editing (Meghna Sen) could have been tighter which could have helped the film by leaps and bounds. One surely feels the length of the film is the villain.

On the whole, UDTA PUNJAB is a dark and serious film that does not offer the traditional entertainment that audiences seek from Bollywood movies. At the same time, it is bold and brave in parts with strong performances by all actors.