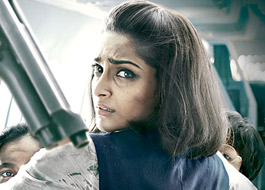 Sonam Kapoor who is currently busy with the promotions of her upcoming film Neerja, will be doing something special in the memory of the Ashok Chakra award recipient Neerja Bhanot. Apart from the fact that the actress has pledged to honour some heroes this Republic Day, she will also be the chief guest on the same day for the flag hoisting ceremony at Bombay Scottish School.

However, Sonam Kapoor has not been invited to the school as an alumni or celebrity but she has been asked to attend it in honour of Neerja Bhanot, the senior flight attendant who saved several lives during the Pan Am hijack. Sonam will be seen in the role of Neerja in her upcoming film. Talking about it, Sonam said, “I am honoured that Bombay Scottish has invited me for the flag hoisting ceremony. The hijack happened 30 years ago, and I am glad that through the film her story has re-emerged. It’s the kind of story that you would want everyone to know. It’s about doing the right thing. Something that’s very relevant in today’s day and age. We are living in dark times. There is turmoil all around us. The qualities that Neerja had, the youth should be encouraged to imbibe those. Not just to be brave, but also to stand for what they believe in.”

The actress adds that she signed the film because she identified with Neerja. “When I signed the movie, the one thing that hit me was that she is like one of us. She is from Bombay Scottish. She’s a Mumbai girl. She is like anyone of us – young, beautiful and successful. The one thing that stands out about her is that she was very principled. She’s definitely someone who displayed many aspirational qualities.”

Sonam Kapoor will be addressing the students during the event. She explained, “Republic Day is also about celebrating people who have done something for the country. And Neerja was all of 23. If you had asked me two years ago about whom I looked up to I would have taken other names, but now I really admire Neerja. She was a girl who came from a family that would seem ordinary, but went to on to do something that was absolutely extraordinary. I want to emphasize on that. She proved that anyone can be a superhero. Kids look up to Superman and Spider-Man who have special powers, and that’s why we need to tell them about people like them who have done extraordinary things. We should be extremely proud that a 23-year-old Indian girl had such extraordinary courage.”

Directed by Ram Madhvani and produced by Fox Star Studio’s and Bling Unplugged, Neerja is slated to release on February 19.

However, the actress has not been invited as an alumni of the institution, or a celebrity. Instead, she has been asked to do the honours because Neerja Bhanot, who Sonam will be essaying in the forthcoming movie Neerja, was a student of the school.