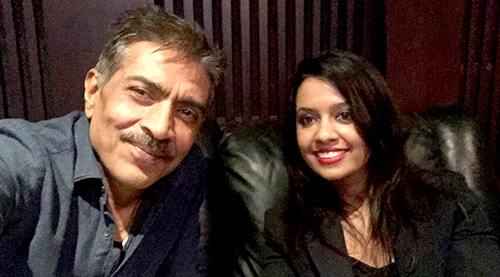 Chief Minister of Maharashtra, Devendra Fadnavis’ wife Amruta decided to enter the glamorous world of Bollywood as a singer. And now, we hear she has crooned for Jai Gangaajal‘s song ‘Sab Dhan Maati‘.

Director-producer Prakash Jha recently mentioned that he had approached Amruta Fadnavis for this devotional number after discussing with the music director of the film Salim-Sulaiman. He further also stated that they recorded the track in December, that too in two sessions over a couple of hours. Revealing about the experience of working with Amruta, Jha mentioned that it was a pleasurable experience and it was the simplicity and enthusiasm of her that impressed him the most. Even when the music directors expressed their wish to re-dub certain portions, Amruta came back to finish off the work without any fuss.

Jai Gangaajal stars Priyanka Chopra as a cop along with Prakash Jha who plays her junior in the film. It is slated to release on March 4.