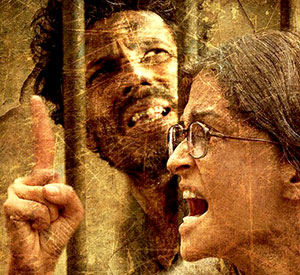 In a stark statement at a key juncture in the film, a striking dialogue on the question of distrust between India and Pakistan makes you wonder that, how long will the decades of hatred between the two neighbouring countries continue to fester. How many more innocent souls like Sarbjit Singh will have to go through inhuman incarceration for no fault of their own? The weight of questions gets heavier; the answers are ricocheting in an ever-changing-directions wind. Omung Kumar’s SARBJIT is a heartrending portrayal of the tragedy of an innocent family centric farmer living at the Indo-Pak border and how he gets sucked into a legacy of hatred for no fault of his own.

Sarbjit Singh (Randeep Hooda) is a farmer who’s a doting brother, husband and father who is humiliated in the most despicable ways in jails in Pakistan for allegedly being Ranjit Singh, the mastermind behind the ghastly Lahore blasts. His stoic sister Dalbir Kaur (Aishwarya Rai Bachchan) makes herculean efforts to attain freedom for her brother. Sarbjit’s wife Sukhpreet (Richa Chadha) raises two daughters Poonam (Ankita Shrivastava) and Swapan (Shivani Saini) with a patient resolve. Dalbir tries out every conceivable option including meeting the Prime Minister of India while Sarbjit desperately collects whatever vestiges of family that he could through stray letters. A Pakistani lawyer Awais Shaikh (Darshan Kumaar) takes over Sarbjit’s case and battles out fanatic forces to try and attain a semblance of justice for Sarbjit and his beleaguered family.

Utkarshini Vashishtha and Rajesh Beri have carefully pieced together a story smeared with blood, tears and sweat. The dialogues are hard hitting and the fact that Punjabi is frequently spoken is never a hindrance in communication for the Hindi speaking audience. Omung Kumar is obviously passionately involved with the cause of prisoners on both sides of the border and at the end makes an impassioned appeal that politics shouldn’t be played when innocent lives are involved. He doesn’t hold anything back and tells the story the way it ought to have been told. The torture sequences and Sarbjit’s state in the jail can be disturbing to watch but Kumar couldn’t have sugar coated the reality and he ensures that the audience will watch the hard facts so that hopefully the gruesome atrocities will never be repeated on either sides of the border.

Aishwarya Rai Bachchan delivers a performance of a lifetime. She imbibes the ageing facet beautifully and extremely gracefully. She has delivered a flawless performance but two scenes where she towers are the first when she loses her child at birth. The vacuousness in her eyes and the shocked body state sends shivers down your spine. Towards the end, Dalbir takes centre stage when her brother is critically injured and she challenges the fanatic forces in Pakistan in an impassioned manner. It is a powerful moment. There are scenes where Dalbir’s efforts are questioned by close family members making her character even more Real and believable.

Randeep Hooda is outstanding. The gradual ageing process exacerbated by terrible torture borne by a battered body has been portrayed brilliantly by Hooda. He doesn’t hesitate in showing the ugly reality or the constant oscillation between sanity and losing his mind. He’s a giant of an actor who deserves far more respect and recognition than what he has already achieved. Richa Chadha never tries to compete with Aishwarya or Randeep but her silence speaks volumes. She makes a solid impact. Darshan Kumaar is effective as the liberal Pakistani lawyer. Ankita Shrivastava as the younger daughter Poonam shows sparks in a scene when she decides to burn all memories of her father.

Kiran Deohans’ camera work captures the essence of the mood and context perfectly. Rajesh Pandey’s editing is good though it could have been slightly more crisper than the final version.

On the whole, SARBJIT is a landmark film with great performances and a superbly told narrative. The entertainment quotient is missing which is compensated by the phenomenal manner in which the story is told. At the box office, it will be appreciated by matured audience.