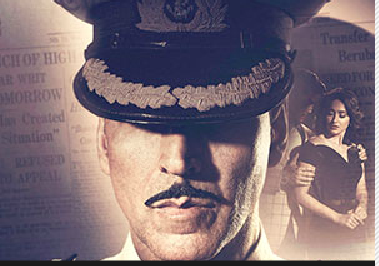 Films based on real lives and real people have become very popular in Bollywood these days. This week’s release is the Akshay Kumar starrer RUSTOM, a film that has been inspired by a ‘sensational case of a Naval officer that led to the end of the jury system in India’. Will RUSTOM ‘sail’ its way through at the Box-Office or will it sink without a trace… let’s analyse.

RUSTOM starts off with a periodic era of 1959, when Mumbai was still ‘Bombay’ and the times when justice was done by the jury members and not by the judge. This is followed by the introduction of the ‘habituated to his uniform’ Commander Rustom Pavri (Akshay Kumar) and his lovely wife Cynthia Pavri (Ileana D’Cruz). One day, when Rustom Pavri comes back home from the sea, earlier than his scheduled date, he is shocked when he gets to know that his wife Cynthia has gone out with the ‘filthy’ rich Vikram Makhija (Arjan Bajwa) and has not been home since two days. Rustom Pavri, then, starts breathing fire and reaches Vikram’s house, only to find Vikram and Cynthia together. Unable to bear the sight of his wife’s deceit, Rustom Pavri loads his official gun and shoots the evil minded Vikram, killing him. Being the ever righteous man, Rustom Pavri then goes to the police station and surrenders himself. When the news of Vikram’s death reaches the ears of his ‘well connected’ sister Preethi Makhija (Esha Gupta), she vows to revenge her brother’s death. As the case goes to the court however, Rustom pleads not guilty. What follows after that is a heated court room drama, mudslinging, the role of the media in the case… all eventually leading to one common thing. What is the ultimate conclusion of all the events, is Rustom Pavri really guilty or is there more than what meets the eye.

First things first. RUSTOM is essentially a crime thriller. While the film does not have a mystery element/ whodunit angle in the storyline, it becomes slightly predictable as it progresses. The fact also remains that, there have been two films that have been earlier made on the same premise. These films were the Sunil Dutt-Leela Naidu starrer YEH RASTEY HAIN PYAAR KE (1963) and the ?Vinod Khanna?-Farida Jalal? starrer ACHANAK (1973). The storyline of RUSTOM has been subjected to a contemporary treatment by Vipul K. Rawal, who is in charge of the film’s screenplay, story and dialogues. When a film has Akshay Kumar as its hero, it’s a given that the screenplay has to be essentially gripping which keeps the audiences on the ‘edge-of-the-seat’. This element however is missing in RUSTOM. The film’s screenplay not just slows down the film’s pace, but also is very average. Had the screenplay been engrossing and captivating, it would have been a different story altogether. The film’s narrative oscillates between ‘convincing’ and ‘not-so-very-convincing’. Even though RUSTOM has been largely inspired by the famous case of KM Nanavati, the film does have its moments that make it furthermore enticing. Those who do not know anything about the (Nanavati) case, will surely take a liking for RUSTOM.

RUSTOM happens to be Tinu Suresh Desai’s second film as a director (his first being 1920 LONDON). Tinu Suresh Desai has done a decent job as a director. While the film is set up in the first half, the second half is filled with court room drama galore. Even though there are moments when the film starts lagging, Tinu Suresh Desai’s manages to put the film back on track towards the end. The flip side (read ‘shortcomings’) of his direction can be seen in the courtroom drama scenes. Generally, court room scenes are filled with high voltage drama and power packed dialogues, something that is totally missing in RUSTOM. On the other hand, it’s the ‘situational humour’ that connects with the audience.

As for the performances, absolutely no prizes for guessing that it is the inimitable Akshay Kumar, who is the ‘captain’ of the ship. Akshay Kumar, who has been extremely versatile in terms of his (diverse) selection of films, adds yet another feather in his cap with RUSTOM. This is the first time ever in his career spanning many years that Akshay Kumar has played a Naval officer. And boy! He delivers such a spotless and flawless performance in this role by staying extremely true to his character. Lending him able support is Ileana D’Cruz as his wife Cynthia Pavri. Despite having limited scope as far as performance is concerned, Ileana D’Cruz holds her own with her restrained performance. Esha Gupta, on the other hand, is good in her role of a revenge seeking woman. Arjan Bajwa, despite his small role, is effective. Other actors like Kumud Mishra (in the role of a newspaper editor), Usha Nadkarni (as the servant), Sachin Khedekar (as Public Prosecutor Lakshman Khangani) and Pawan Malhotra (as Inspector Lobo) too have strong parts and keep the movie together.

The film’s music (Arko, Raghav Sachar, Ankit Tiwari and Jeet Gannguli) is pretty average. The film’s cinematography (Santosh Thundiyil) is decent, if not superlative. The film’s editing by Shree Narayan Singh is average.

On the whole, RUSTOM comes across as a well crafted crime thriller that meets expectations. It has its share of captivating moments as well as the loose ones. At the Box-Office, competition in the form of MOHENJO DARO will limit its potential. However, the holiday period post the weekend and positive word of mouth will prove beneficial for the movie.