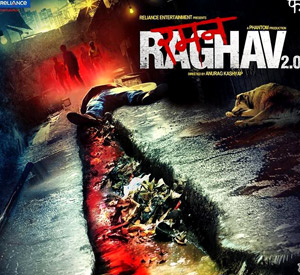 We all know and are aware of the fact that Bollywood is not new to genre of thrillers. Almost every second or third release in Bollywood belongs to the thriller genre. This week’s release RAMAN RAGHAV 2.0 also falls in the same category, however unlike the plethora of thrillers that tend to focus on the supernatural this one is a psychological thriller. But will RAMAN RAGHAV 2.0 have a ‘thrilling’ run at the Box-Office or will it lose its fizz, is what we analyze.

First things first, RAMAN RAGHAV 2.0 is not based on the life of the infamous serial killer of the 60s, something that the makers of the film establish in the very beginning of the film. The film starts off with a ‘musically high’ introduction of a young IPS officer Raghav (Vicky Kaushal) and a ‘deadly’ introduction of Ramanna aka Sindhi Dalwaai aka Raman (Nawazuddin Siddiqui). Raghav, who, despite being an IPS officer, is almost always high on drugs; in fact Raghav does not leave a single chance to indulge in substance abuse, even when he is on duty. The film, then, traces its roots with a series of flashback events that establish Raman’s character as a serial killer with a history of random and meaningless killings. As the film comes back to the present, Raman gets into confessional mode and says that he kills people because he likes to kill them for no reason. He also goes onto proclaim that he is a ‘Godsent gift to mankind’, who has been sent by God to kill people after their job is done on earth. What follows from hereon are a series of merciless and inhuman murders. After a gap of 7 years, Raghav visits his sister’s place and lands up killing her, her innocent husband and her child. Simultaneously, Raghav also kills his ‘girlfriend’. Amidst all this, Raman confesses to Raghav about his ‘connection’ with him, that really stuns the latter. What was the basic reason for Raman to go to his sister’s place, what was the reason for the policeman Raghav to kill an innocent girl and what is the ‘connection’ that Raman tells Raghav that rattles his senses, is what forms the rest of the film.

The film’s writers (Vasan Bala, Anurag Kashyap) on the ‘pretext’ of creating an edge-of-the-seat thriller in the form of RAMAN RAGHAV 2.0, land up doing a shabby job. Even though their writing helps in keeping the audience and their fears intact (strictly in places), it is the overdose of everything that kills the basic essence of the film. Because Anurag Kashyap has always delivered with his dark films (which majorly forms his home turf), the expectations from RAMAN RAGHAV 2.0 were sky high. Coupled with this were the film’s gripping trailers, which, only added to the expectations. Unfortunately, despite all this, Anurag Kashyap goes astray with his direction at many places, which greatly undermines what could have been an eerily gripping psychological thriller. In the name of ‘cinematic liberties’, there are way too many flaws in the film. To cite a few examples, where on earth does one find an IPS officer like Raghav, who is always high on drugs and flaunts his official revolver to have his way with the girls in night clubs? If that wasn’t enough, he also lands up killing someone, that too, at the behest of a dreaded criminal. Besides all this, during one of Raman’s escapades he manages to free himself from the clutches of the policemen and flee by simply unbuttoning his shirt! The cops in this movie are straight out of the 80’s Bollywood films where they basically can’t do a single task properly.

While all of the film’s characters get established and justified in its first half, it’s the film’s second half that slips. The film’s first half tries to establish a promising plot, but the second half drags endlessly and is filled with meaninglessly gruesome murders. Add to that, Anurag Kashyap continues to suffer from his Quentin Tarantino hang over by breaking the film into ‘Chapters’ and stretching a scene for longer than expected, but many times it just feels too much to take.

While the music (Ram Sampath) of RAMAN RAGHAV 2.0 is nothing to boast about, it is the film’s background music (Ram Sampath), that, more than makes up for the film’s music. The film’s background music acts as a catalyst between the film’s script and the characters. The film’s cinematography (Jay Oza) is spot on and apt. Here, a special mention goes to the usage of guerrilla filmmaking techniques, which helps the film look more realistic. The film’s editing (Aarti Bajaj) is loose and scenes drag endlessly. To be more specific, had the film been trimmed by almost 15-20 minutes or so, it would have been a different story altogether.

On the whole, though RAMAN RAGHAV 2.0 promises to be an edgy thriller, the film fails to deliver. It is only Nawazuddin’s brilliant performance that helps you sit through this 140 mins long film.