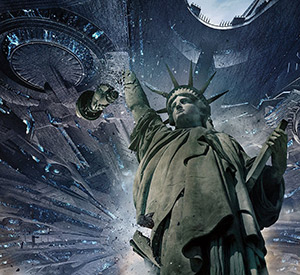 The film starts off from 20 years after the alien invasion that we witnessed in the 1996 Roland Emmerich sci-fi film, INDEPENDENCE DAY, with Dr. Thomas J. Whitmore (Bill Pullman) who is still dealing with the repercussions of the invasion. From here, the film begins to introduce new characters, Lieutanant Jake Morrison (Liam Hemsworth) and Dylan Hiller (Jesse Usher) aka Will Smith’s son who is a Captain at the Earth Space Defence (ESD), and David Levinson (Jeff Goldblum) who has now taken on a more vital role as being one of the survivors from the original invasion. Together this motley crew are faced with an even bigger threat with the vanquished aliens returning to lay waste to planet earth. In fact the members of the ESD have now become the planet’s last line of defence, which along with the help of other world leaders and the United Nations have managed to make great strides in technology that has been developed after researching the debris from the original invasion. But as the fate of the entire human race hangs in balance, will this crew manage to pull off yet another nail biting win or will the renewed onslaught by the aliens prove overpowering is what the rest of the film is about.

Back in 1996 when INDEPENDENCE DAY released, it fast became one of the best visual experiences on the big screen with a plethora of explosions and cutting edge CGI (for that time) literally wowing the audience. Another factor that worked for the original was Will Smith and his off handed attitude that despite coming off as an Elvis impersonator managed to keep the proceedings light yet gripping even when faced with dire consequences. Cut to two decades later, INDEPENDENCE DAY: RESURGENCE certainly has been developed on a much bigger scale, with bigger budgets, more advanced visual technology and a more receptive audience, the film comes across as a worthy successor that despite having its pitfalls does manage to capture the essence of the first film. Speaking of pitfalls, INDEPENDENCE DAY: RESURGENCE does have its share of drawbacks with a major one being, the lack of ability for the viewer to relate to and connect with the onscreen characters. While in the first film the viewer instantaneously connected to and developed a rapport with the characters, this one gives the viewer a feeling of being a mere spectator on a large battle field.

As for the performances, Liam Hemsworth being the main protagonist, who reprises the title role that could have been compared to Will Smith’s from the first, does a good job. However, he falls massively short of being convincing as the film’s main saviour. Jesse Usher as Dylan Hiller, Captain Steven Hiller (Will Smith)’s step son is underwhelming. The lad who survived the original invasion, should have been more inspiring especially since he along with Hemsworth are literally the only saviours. On the other hand, the conversations of Nicolas Wright as Floyd Rosenberg and Deobia Oparei, who essays the character of Dikembe Umbutu, bring in much needed comic relief that not just lightens up what could have been a never ending series of destructive assaults, but also brightens up the film.

Coming to the visual effects that are aplenty unlike the first film, INDEPENDENCE DAY: RESURGENCE comes across as a more refined venture, obviously owing to the huge developments made in CGI and general VFX in past 20 years. In fact, the film looks pretty slick and stylish developed on a grand scale with no expense being spared to heighten its visual appeal. For those of you who enjoy some serious CGI, INDEPENDENCE DAY: RESURGENCE features some adrenaline pumping aerial dog fight sequences that are easily comparable to the ones seen in the STAR WARS series. However, despite the visuals and over the top wanton destruction, the lack of witnessing collateral damage does put a dampener on the magnitude of loss faced in terms of lives lost.

Overall, INDEPENDENCE DAY: RESURGENCE that can be said to be a good successor to the original comes across as a visual treat that could have been much better had the film not been rushed. In fact, while the first half of the film plays out well, establishing each new character and recapping what happened in the previous film, the second half comes across as being highly rushed, seeming as though the director Roland Emmerich was hard pressed to wrap the film within the two hour time frame.

On the whole, INDEPENDENCE DAY: RESURGENCE is a visual spectacle and is a must watch on the big screen.