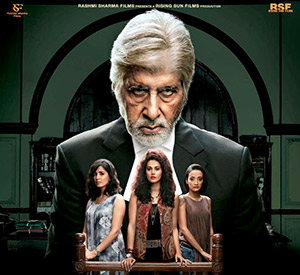 The box-office has been reasonably dull in the past few weeks. This week’s release is the Amitabh Bachchan starrer PINK, a courtroom drama, which deals with a sensitive premise of status of young women in the society. Will PINK turn out to be a colourful film at the Box-Office, or will it lose its colour, let’s analyse.

Shoojit Sircar’s PINK is essentially a simple story about the complex problems issues like inequities and hypocrisies the women in India face everyday. The film starts off with a ‘tensed up’ introduction of Meenal Arora (Taapsee Pannu), Falak Ali (Kirti Kulhari) and Andrea (Andrea Tariang), alongside the ‘silent’ introduction of retired advocate Deepak Sehgal (Amitabh Bachchan). Meenal, Falak and Andrea live together as paying guests in Delhi, earning their respective livelihoods. These girls lose their smiles and peace of mind because of a terrible incident that threatens their lives. The incident takes place when Rajveer (Angad Bedi) forces himself upon Meenal and she hits him hard with a glass bottle injuring him seriously. After this incident, the girls come under attack from all sides as Rajveer happens to be a polticians nephew. Soon his friends start threatening the girls. When the incident gets registered with the police, it leads to an array of investigations, interrogations and character assasination of the three girls. With no lawyer ready to represent their case, the girls find their sole ray of hope in advocate Deepak Saigal, who volunteers to fight their case, despite having given up his law practice. How will the girls prove their innocence against such a powerful opposition and does advocate Deepak Saigal help the girls win the case and clear their names, is what forms the rest of the film.

When PINK’s promos came out, one expected an edgy and a realistic cinema. The fact is that PINK does not disappoint at all in this aspect. It boasts of a gripping screenplay that holds your attention till the end. Despite the film’s slow narrative, especially in the first half, it keeps you engaged and hooked. The film has some hard hitting dialogues (Ritesh Shah), which elevates the situations and the corresponding elements. Do not miss the entire courtroom drama, especially when Amitabh Bachchan grills Taapsee Pannu and Angad Bedi and also when Kirti Kulhari breaks down in the courtroom.

The film’s director Aniruddha Roy Chowdhury, who happens to be a big name in Bengali cinema makes his Bollywood debut with PINK as a master storyteller. While he uses the first half to just set up the film, it’s actually the gripping second half that helps the film in reaching its crescendo. The manner in which Aniruddha Roy Chowdhury has extracted realistic performances from the film’s actors is definitely laudable. Despite the film being rich in content, the film does carry a grim feel due to its subject matter. Also, the film does not explain certain elements very clearly like the relationship between Amitabh Bachchan with an ailing lady named Sarah. Another big loophole was that, despite Taapsee Pannu’s character being molested in a car the second time, there is not mention of such a major event in the court case. Also, the scene of Kirti Kulhari’s fake ‘obscene poster’ that costs her the job, seems totally forced into the film.

PINK is embellished with bravura performances and it is undoubtedly and undisputedly the towering Amitabh Bachchan who steals the show. Even though this is not the first time that Amitabh Bachchan has played the role of an advocate, he manages to bring something different to the table in PINK. It won’t be wrong to say that, with PINK, Amitabh Bachchan has not just delivered an immensely memorable performance, but also one of his career best performances. Trailing an extreme close second is Taapsee Pannu, who manages to ‘earn her place under the sun’ with her sincere portrayal of Meenal. Taapsee Pannu will surely be a serious contender for all the awards this year. Kirti Kulhari, whose last film was the forgettable JAL, delivers a rock solid performance in PINK. She utilises to the maximum the screen time that is offered to her. On the other hand, Andrea Tariang does a very job too. While Angad Bedi is scarily convincing, Piyush Mishra and his ‘courtroom antics’ are exceptional. Dhritiman Chatterjee is extremely convincing in the role of the judge. The rest of the film’s characters help tremendously in the progress of the film.

While the film has absolutely no scope for music (Shantanu Moitra), its background score (Shantanu Moitra) is extremely haunting and creates the ambience for the film. The film’s cinematography (Avik Mukhopadhyay) is decent. The film’s editing (Bodhaditya Banerjee) is average.

On the whole, PINK is a compelling film which exposes hypocrisies and double standards against women in our society. With powerful performances from the starcast, the film leaves you shocked, stunned and speechless. At the Box Office, it will be patronised by the multiplex audiences and the positive word of mouth will translate into healthy footfalls for the movie. Don’t miss this one as it hammers home a very powerful message.