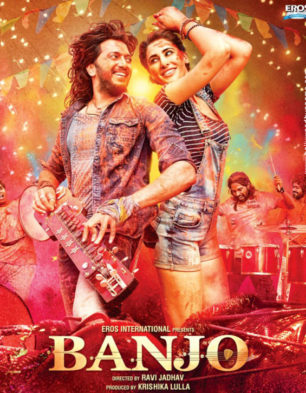 From the time Riteish Deshmukh made his Bollywood debut in 2003 with TUJHE MERI KASAM till where he has reached today, he has shown immense versatility and growth as an actor. At the same time, the fact also remains that, he has delivered his career’s biggest hits in multi- starrer films. This week’s release BANJO sees Riteish Deshmukh as a solo hero, paired opposite the svelte Nargis Fakhri. Will BANJO prove to be a ‘musical’ success for both, its makers and Riteish Deshmukh at the Box-Office, or will it land up losing its strings, lets analyze.

BANJO is essentially a musical action film that mirrors a musician’s livelihood ‘orchestrated’ by destiny and his survival in this world without compromising on his self-respect. The film starts off with the ‘musical introduction’ of the Mumbai based Nandkishore aka Taraat (Riteish Deshmukh), an extraordinary banjo player who also doubles up as an extortionist for the sake of extra money. His banjo band consists of three (part time) members named ‘Grease’ (Dharmesh Yelande), ‘Paper’ and ‘Vaaja’. On the other side of the globe (New York, to be specific), exists an aspiring and spunky DJ Chris (Nargis Fakhri), who wants to enter a prestigious music championship. While she is searching for the right music as her entry in the championship, her Mumbai based friend (Luke Kenny) helps her by sending a recording of Taraat’s banjo performance during Ganeshotsav festival. Totally impressed by Taraat’s mesmerising tunes, Chris reaches Mumbai, in order to search for Taraat and his talented team members, as she wants to collaborate for a song with them as her entry in the music championship. In no time, Taraat unknowingly becomes Chris’ guide and friend in Mumbai. And while, doing so, he gradually falls in love with her. At the same time, Taraat and his gang refrain from revealing to Chris that they are banjo players, fearing insult and rejection from her. What they don’t realise however is that it is in search of their band for whom Chris has especially flown down to India. One fine day, when Chris gets to know about Taraat and his banjo band, her happiness knows no bounds and she immediately starts jamming with them for her songs. Amidst all this, an unfortunate incident occurs that completely changes the lives of Taraat, his band members and Chris as well. Will Taraat ever muster the courage to confess his feelings for Chris, what was the unfortunate incident that splits Taraat with his band members and does Taraat become successful in helping Chris to reach her ultimate destination (the music championship), is what forms the rest of the film.

While BANJO’s promos beautifully mirrored the lives of street musicians, the film elaborates the same in totality. The film’s story set up (Kapil Sawant, Nikhil Mehrotra and Ravi Jadhav) is relatable. After taking a promising start, the film also highlights the life, lifestyle and the dreams of those (unsung talents) living in the slums. The film successfully manages to establish the quirky characters of Taraat and his band members. The life and lifestyle of the slum dwellers have been convincingly portrayed in the film. The film’s dialogues (Kapil Sawant, Nikhil Mehrotra and Ravi Jadhav) are simple, unassuming and funny. There are many one liners in the film, which have been used as punches, will surely have the audiences in splits.

After having proved his mettle as an impeccable director in hit Marathi films like NATARANG, BALGANDHARVA, BALAK-PALAK, TIMEPASS, REGE and others, Ravi Jadhav makes his Bollywood debut with BANJO. Being an experienced hand in ‘meaningful direction’, he has done a decent job in BANJO. But due to the film’s weak writing and confused narrative, there are places where the film tends to go off-track. It is this aspect that curtails Ravi Jadhav from going all out in direction. For example: One gets confused about Nargis’ character and her ultimate goal in life. While her character starts off as a DJ, then, becomes a music producer and gradually, lands up being a performer! All of this, in the name of taking part in the New York music festival, which never happens. Her getting involved in Riteish’s gang, searching for sponsors and performing in Indian clubs actually beats her basic purpose of coming to India! On the other hand, even Mohan Kapur’s character definitely required more clarity. The film suffers its biggest downfall in the form of its abrupt ending too. The film’s sudden ending seems like a deliberate attempt to cut short the film, which surely backfires heavily on the film’s narrative.

As for the performances, the film sails on the able shoulders of its protagonist Riteish Deshmukh. After having proved his mettle in multi- starrer films (majorly slapstick comedies), it’s a refreshing change to see Riteish Deshmukh in an intense role. BANJO sees Riteish Deshmukh convincingly shouldering the responsibility of a solo hero film. On the other hand, Nargis Fakhri, delivers a decent performance in BANJO. She is extremely at ease with her character, and hence, she does complete justice to her role of a foreigner and her struggles of dealing with the slum based banjo players and their quirky lifestyles. Luke Kenny, who is totally ‘in his character’ in the film, is extremely convincing. Do not miss the scene where he ‘reveals’ his identity (in Marathi-Hindi lingo) to Riteish Deshmukh and his band members. Dharmesh Yelande, who is mostly known for his dancing skills, comes across as a stark revelation in BANJO. His comedy timing is bang on. The other actors playing Riteish’s band members are brilliant.

As far as the film’s music (Vishal-Shekhar) is concerned, despite BANJO being a musical, lands up having only one chartbuster track in the form of ‘Udan Choo’. Even though the rest of the tracks are pleasant, they fail to leave an impact. On the other hand, the film’s background score (Sourav Roy) is decent and is in tune with the film’s narrative.

On the whole, BANJO fails to strike the right notes on account of its low hype, confused second half and bizarre culmination. At the Box-Office, it will struggle for decent footfalls.
–