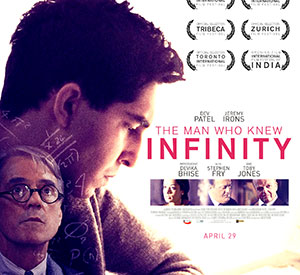 Our country has produced some great men who have left an incredible mark in various fields but very little is known about some of them. One of the Hollywood releases of the week, THE MAN WHO KNEW INFINITY, attempts to enlighten not just Indians but viewers across the world about Srinivasa Ramanujan, a pioneer in mathematical theories. Mr. Ramanujan had a fascinating life but have the makers succeeded in putting it up on celluloid in the best possible way? Let’s analyze

Set in 1914, the film begins with the portrayal of the life of Srinivasa Ramanujan (Dev Patel), a young teenager who hails from Madras and is passionate about mathematics. He realizes he is gifted and jots down his findings in a book. Ramanujan’s boss Narayana Iyer (Dhritiman Chatterjee) encourages him to share some of his findings with the well-known professor of Trinity College, Cambridge, G.H. Hardy (Jeremy Irons). Impressed, Professor Hardy invites Ramanujan to Trinity despite opposition from certain quarters. Ramanujan who has just got married to Janaki (Devika Bhise) moves to London with a heavy heart but once there, he totally immerses himself in proving that his theories are accurate despite hordes of challenges that come across his way. Whether he succeeds in his endeavour is what the rest of the film is all about.

The film begins on a decent note and special reference to Ramanujan’s entry scene which is quite impressive. But it takes a while for the film to really connect with the audiences. Moreover, the film lacks certain dramatic moments especially when it had the scope for such sequences. Though in a way, this is a good move since it helps in keeping the realism intact, however, on the flip side, such moments could have added an impact.

Though the plot has retained its authenticity of a biopic, there are several dips in the script. The bond shared by Ramanujan with wife Janaki seems a tad bit unbelievable. A major conflict point in the film is Janaki’s letters not reaching Ramanujan as his mother never posts them. But it’s never established why Janaki gave his mother the letters to be posted when she could have done it herself. Lastly, the film is about mathematics and those who don’t really have an interest in the subject may find it difficult to comprehend what’s going on. However, the execution is more to blame here. A similar film released last year, The Imitation Game, though complex, it was easier to understand as well as had a far more engaging narrative. In case of THE MAN WHO KNEW INFINITY, the execution could have been better in this regard. Matt Brown’s direction is simple and works to an extent. But it could have worked better if the film had more exciting moments.

Having said that, the film has some great moments to boast about. The scenes shot in India look quite appealing. The final 30 minutes are the high point of the film. One does empathize with Ramanujan especially thanks to the struggles that he faces.

Some of the performances are quite praiseworthy. This is one of Dev Patel’s performances which he will surely be remembered for. Initially, his act and the accent remind us about one of his performance in The Best Exotic Marigold Hotel though. Yet, he delivers a fine performance and captures the passion and excitement of his character well. Jeremy Irons is quite impressive and some of his scenes with Dev are quite delightful as they are something that viewers would enjoy. Devika Bhise has a nice screen presence but has limited screen time. Dhritiman Chatterjee has even lesser screen time but he leaves a mark. Toby Jones (Littlewood) is efficient while Arundathi Nag (Ramanujan’s mother) is strictly okay.

The film scores in its technical departments. Coby Brown’s music is fine while Ann Maskrey’s costumes and Luciana Arrighi’s production design are quite authentic and appealing.

On the whole, THE MAN WHO KNEW INFINITY is worth watching as it makes an earnest attempt in enlightening viewers about a great mind who left an incredible mark in the field of Mathematics. Though there are some great performances and sequences, the shortcomings make it just a one-time watch.