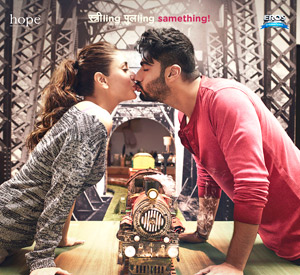 Almost every second Bollywood film claims to be different and zara hat ke in their story and presentation. While there are few films that live upto the promise of being ‘different’, there are others which land up being damp squibs. This week’s release is the Arjun Kapoor – Kareena Kapoor starrer KI & KA, a film about gender differences and breaking stereotypes. Unlike the quintessential hero that Bollywood has witnessed so far, this film is an attempt to change the perception about many things. Does KI & KA become successful in being the agent of change or will it turn out to be a no-show at the Box-Office, let’s analyse.

The film starts off with a wedding party that Kia (Kareena Kapoor Khan) is attending. Every time someone tells her to enjoy the party, she picks up her phone and acts as if she is talking. When she leaves the wedding midway, she reasons her departure by a small talk on the position of a woman in today’s society that stuns everyone present there. The film then ‘takes off’ to her getting introduced to a sobbing Kabir Saini (Arjun Kapoor) on a flight. When asked about his sobbing, she discovers Kabir to be a Mama’s boy, who is missing his dead mother because it is her birthday. A few meetings later, Kia understands Kabir’s reason to be non-ambitious while Kabir understands Kia’s goals and aims in her life in the corporate race. One fine day, a train-passionate Kabir lands up proposing to Kia in a toy train yard, post which she gets him introduced to her broad minded mother (Swaroop Sampat). While introducing him to her mother, Kia states Kabir’s ambition to be a ‘house-husband’ and run the family and his selfless support in helping her fly in the corporate world. The couple gets married and begin their unusual journey. While Kabir takes to the household chores (including spying on the maid) like a fish to water, Kia starts inching towards the realisation of her ambitions. Being extremely intrigued by Kabir, Kia’s colleagues express their desire to meet him. Amidst that get-together, an initially reluctant Kia later reveals Kabir being a ‘house-husband’. What follows after that are offers galore for Kabir who becomes ‘the most wanted munda’ all over the place, right from the TV shows, cookery shows and even the housewives in the neighborhood who want to slim down through his organic diet charts and workouts. One day, when Kia is abroad for a business meeting in Dubai, Kabir flies down to Mumbai on the invitation of ‘an extremely impressed’ Jaya Bachchan and a bitter Amitabh Bachchan, Kia’s mother gets admitted in the hospital for low blood pressure. Because of his meeting with the Bachchans, Kabir puts his mobile on a silent mode and lands up missing as many as 20 calls from Kia and her mother. What follows after that is a big showdown in the form of Kia’s outburst. Does Kabir walk out of Kia’s life, does Kia ever realise her mistake towards Kabir and apologise, does the couple ever meet and live a happy family is what forms the rest of the story.

One really needs to applaud the film’s writer- director R. Balki, who has dared to live up to the term of ‘being different’ with this film. With this film, he has tried to redefine the quintessential ‘hero’ that the silver screen has witnessed so far. The best part about the screenplay is that it just does not come across as superficial at any point. The film, in totality, has been wonderfully conceived, beautifully written and splendidly enacted by the starcast! Besides it successfully conveys a powerful message. All of R. Balki’s earlier films like CHEENI KUM, PAA and SHAMITABH, despite having quirky storylines, never challenged the obvious. But, with KI & KA, R. Balki challenges the stereotypical role of a husband and a wife in the society. In simple words, one can say that KI & KA has traces of the Amitabh-Jaya starrer ABHIMAAN minus the melodrama.

The film has its share of blemishes as it slows down in the second half but picks up pace in time towards the climax. There are certain places where the story seems to lag.

As for the performances, the film totally belongs to Arjun Kapoor and Kareena Kapoor Khan. Arjun Kapoor is mighty impressive in the film and has carried the film on his strong shoulders. He gives a balanced performance and never goes overboard. His character is quite affable and he will definitely have an increased female fanbase after this film. Kareena Kapoor Khan on the other hand looks perfect as the strong head corporate lady. She has stayed away from her usual glamorous look in this film and yet looks stylish. She has portrayed the character of an ambitious woman brilliantly. The scenes of her emotional outburst in the climax are very impressive. Arjun and Kareena look very compatible as a couple onscreen. Balki has also handled the age factor well showing Kareena to be a few years older than Arjun. The veteran actress Swaroop Sampat exudes the same freshness as ever. Her endearing screen presence and persona simply lights up the screen every time she appears. Here, a special mention should also go to Amitabh and Jaya Bachchan. Though the couple play themselves in the film, they manage to impress thoroughly in their cameo.

While the film’s music (Ilaiyaraaja, Meet Brothers, Mithoon) is a letdown (except for the ‘High Heels‘ track), the background is decent, but tends to go a little off from the proceedings at times. The film’s cinematography (P.C. Sreeram) is average. There are times in the film where the camera movements are too shaky and distract the viewer especially during Kareena’s outburst in the end. The film does boast of crisp editing (Chandan Arora).

On the whole, KI & KA is a cleverly crafted feel-good film that packs all the emotions. Though it has strong performances by both Arjun and Kareena, the film is bound to draw extreme reactions from the orthodox audiences who may find the premise difficult to digest. It is an urban progressive film and should appeal more to women and young married couples.