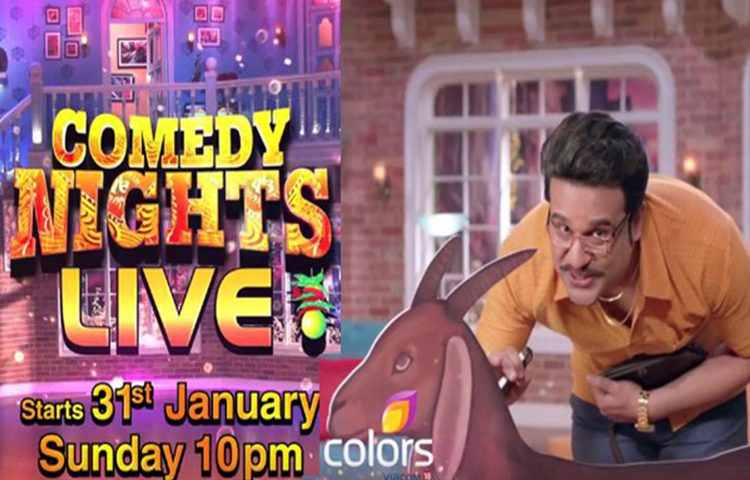 We know you have replaced ‘Comedy Nights With Kapil’, but stop reminding about it! Rating *1/2

A show which was launched yesterday with a lot of expectations riding on it, a show which had a lot of controversy surrounding it, even before it started- ‘Comedy Nights Live!’
With its first episode being aired, we derive the good and the not-so-good factors which should determine the show’s fate.

The Theme
‘Comedy Nights Live!’ is set on the same backdrop of ‘Comedy Nights With Kapil’ where Bittoo Sharma (Kapil Sharma) has left the house and now Pappu Singh (Krushna Abhishek) resides in the same house. He is joined by Sittoo Sharma (Bittoo Sharma’s apparent son) (enacted by Bharti Singh) and Upasana Singh (Bua.) The neighbours which included Gutthi (Sunil Grover) and Palak (Kiku Sharda) have now been replaced by a padosan, Mangla Mafatlal (Siddharth Sagar) and a firangi-speaking man.

That’s the premise and…ahm, that’s pretty much it!

Before we get into the negatives, we will narrow out the positives. Honestly, there are very few to be noted! The most pleasant surprise was watching Siddharth Sagar on the show. The man literally helms the otherwise falling show, Life Ok’s ‘Comedy Classes’ on his own shoulders. His inclusion in this show is the only silver lining in the massacre caused, where his talent can be a saving grace at times!

Bharti Singh has done her usual job of putting in a great performance and managing to get a smile (if not laugh) through her gags.

The biggest question which the show leaves you with is that if you are trying to replace a cult show, the last thing that you can do, is adopt the same format and same sets!
The usual debate which a replacing show faces is that, one should try and not compare the two. However, when you retain the things which are a replica of the predecessor and go ahead and crack jokes on the ex-host, the viewers cannot help but compare the two of them.
Krushna Abhishek, who leads the cast and hosts the show is a star when it comes to ‘Comedy Nights Bachao’. There he holds the show’s interest and gags by his antiques and acts where many of the others fail to impress.
But here, in his Pappu and Pappi Singh characters, Krushna falls flat on humour, presence and personna. The worst moment in the whole show was Krushna pulling indirect jokes on Kapil, which invited hatred and bashing right away.
He tried to revamp some humour when special guest Madhuri Dixit Nene came in, but again, it was nothing substantial and ultimately turned out to be a disaster.

Siddharth Sagar barely had a role to play and that in itself is a negative. His talent deserves more screen-time, at times even more than Krushna.
Upasana Singh’s entry was a surprise which evidently portrayed her moving-on from the ‘Kapil era’ and choosing to work with new members. However, I don’t know if it’s just me, but the ‘Bua’ gags are no longer humorous and are nothing but just monotonously tiring!

Mika Singh replacing Navjot Singh Sidhu is probably one of the most hazardous creative decision the makers have made. Of course, one cannot expect the impromptu shayaris that Sidhu used to flaunt, but the least that was expected of Mika was adding some content to the show.
The man was just seated and did not have any participation whatsoever (except for a lame song being sung at the beginning and later in the end for Madhuri, which got her visibly awkward.)

The Verdict
The makers have taken a huge risk by taking digs at Comedy Nights With Kapil. They have done it so frequently that even someone who probably isn’t a fan of Kapil’s show, may start disliking this extreme lack of respect.
Adapting the same format and same sets is a calamity. A replacing show should probably adapt a novel concept with flavours from it’s predecessor, however, Comedy Nights Live! did not even bother to change the sofa from the previous set. (not kidding!)

Kapil’s aura and stage presence cannot be matched by anyone, however, the cast should try and create their own presence instead of trying to takeover.

Krushna and Bharti are known for their physical and double meaning humour. However, this show format supports family humour, which is going to be a challenge for the team to live up to.
With very few positives, the show seems like a train-wreck! However, with more star-power in future and analysing feedback, there is a fair scope of improvement.

The acceptance and ‘moving-on’ criteria will only happen if they themselves stop reminding the viewers that THEY HAVE REPLACED A CULT SHOW!