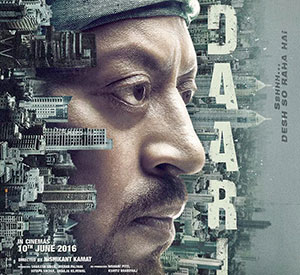 Bollywood has seen many films that have been based on the theme of common man’s fight against rampant corruption. Testimonies to this stand bright in the form of films like NAYAK, A WEDNESDAY, RANG DE BASANTI and others. This week’s release is the hard hitting MADAARI that stars Irrfan Khan in the lead role. Will it be able to ‘juggle’ its way to the Box-Office collections, let’s analyze.

The film starts off with the kidnapping of Home Minister Prashant Goswami’s (Tushar Dalvi) only son Rohan Goswami (Vishesh Bansal) by Nirmal Kumar (Irrfan Khan). The kidnapping does not happen in a day’s time. It’s only after Nirmal ‘studies’ all the activities and movements of his ‘target’ Rohan, does he manage to kidnap him after drugging his food. Needless to say, this kidnapping shakes not just the Home Minister Prashant Goswami and his wife, but also his cabinet ministers. Being a high profile case, the razor sharp Nachiket Verma (Jimmy Sheirgill) gets chosen for the job of bringing back Prashant Goswami’s son. And when the kidnapper Nirmal calls up Prashant Goswami, the latter who was expecting a ransom in the form of some money, gets shell shocked to hear Nirmal’s strange demand. Amidst all this, Nachiket Verma and his team manage to track down Nirmal and his whereabouts. At the same time, Nirmal calls Prashant Goswami and demands him to have an open discussion before the general public, something that Prashant Goswami agrees to. But, this time round, Nachiket Verma instructs his team to shoot Nirmal the very moment they see him. Does Nirmal keep his promise and fearlessly meet Prashant Goswami in front of everyone, does Nirmal really keep the child Rohan safe in his ‘custody’, and why exactly is Nirmal doing all this, is what forms the rest of the story.

While MADAARI’s trailers gave an impression about the film being high on drama and adrenaline rush galore, the film turns out to be (almost) the opposite. While the film’s story (Shailja Kejriwal) is very average, its screenplay (Ritesh Shah) is unconvincing and very convenient, with lot of cinematic liberties taken to push the story forward. The subject of corruption in the system is not anything new however the treatment could’ve made a lot of difference. The film’s script however fails to bring that novelty factor.

The film’s director Nishikant Kamat (who had directed the action packed Rocky Handsome earlier this year) does a very average job with MADAARI. Given the fact that, hard hitting films happen to be Nishikant Kamat’s homeground, the audiences’ huge expectation that he would bring something new with MADAARI, sadly remains unmet. While the film’s first half is average with no edge-of-the-seat thrills, the film loses its remaining charm in its stretched second half. Its only the film’s last 15-20 minutes that actually have a gripping effect on the viewers.

Given the fact that Nishikant Kamat had a powerful performer like Irrfan Khan in the film, he could have easily turned MADAARI into a miraculously outstanding film. What also work against the film are the ‘over-the-top’ and intangible situations that Nishikant Kamat shows in the film. Examples to this are in the form of scenes like despite Irrfan Khan’s wife going and settling abroad for unknown reasons, still, she lands up supporting him and his cause. Secondly, despite Irrfan Khan kidnapping the only son of the Home Minister (no less), he very conveniently ‘summons’ the Home Minister and other ‘defaulters’ in his house in a simple chawl, while the top security forces standing right outside are helpless.

Speaking about Irrfan Khan, amidst everyone, he is the only actor who stands out in the film. The film (needless to say) rides solely on the shoulders of this powerhouse performer, who, yet again, churns out a decent (but, not splendid) performance with MADAARI. Despite being the kidnapper, his emotional bond with the kidnapped child (read ‘Stockholm Syndrome’) is very endearing. What the audience will sorely miss in his performance are those hard hitting one liners (both, witty and sarcastic) for which he is best known. Trailing Irrfan Khan on a close second is Jimmy Sheirgill, who, yet again, does a decent and commendable job with his character in the film. A special mention goes to the talented child artist Vishesh Bansal, who holds his own despite Irrfan Khan being his co-star. The other actors do a decent job.

Despite the presence of a catchy track in the form of ‘Dama Dama Dam’, the film has totally no scope for music (Vishal Bhardwaj, Sunny-Inder Bawra). On the other hand, the film’s background score (Sameer Phaterpekar) is decent and moves in tandem with the film’s story.

The film’s cinematography (Avinash Arun) is poor. Even the stock footage that has been used in the film is of extremely poor quality. The film’s editing (Aarif Shaikh) could have been a lot better.

On the whole MADAARI comes across as a thriller which holds your attention only in parts. It lacks consistency and punch and will therefore appeal to a limited set of audience. At the box office, its business prospects will be limited.