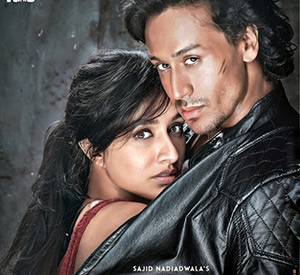 Exactly in the year 1990, released a film titled BAAGHI: A REBEL FOR LOVE that starred Salman Khan and Naghma, which was Salman Khan’s second big release. Exactly 26 years later, Bollywood today witnesses a film with the same title BAAGHI, starring Tiger Shroff and Shraddha Kapoor. This film, incidentally also happens to be Tiger Shroff’s second film. Will this film help Tiger Shroff to reach dizzying heights like his ‘predecessor’ or will it prove to be a ‘rebel with a pause’ at the box-office, lets’ analyze.

The film starts off with the introduction of Ronny (Tiger Shroff) and the kidnapping of Sia (Shraddha Kapoor). Desperate for money for the treatment of a young boy, Ronny undertakes the task of getting back Sia from the clutches of the villainous Raghav (Sudheer Babu). As he boards the flight, the viewers are treated to a flashback of events that connects Ronny’s yesterday with his today. The flashback of events reflect the blooming love story between Ronny and Sia and how Sia’s money minded father (Sunil Grover) plays the villain in their love story and agrees to marry her off to Raghav, who lures him with oodles of money. Because of a certain misunderstanding between Ronny and Sia, their relationship goes for a toss. Ronny, meanwhile, at the behest of his late father Colonel Samarjeet Singh, unwillingly becomes the student in the Kerala based Academy Of Kalaripayattu, that’s run by Guruji (Grandmaster Shifuji Shaurya Bharadwaj). In due course of time, Guruji tames the wild and carefree Ronny into an extremely disciplined student… in other words, a rebel with a cause. But, when Guruji gets to know about his son Raghav’s plan of forcibly marrying Sia, he raises strong objection. That’s when the emotionless Raghav kills his father. And when Ronny gets to know that Raghav, who has Sia as his captive, is also the one who killed Guruji, hell breaks loose and Ronny becomes uncontrollable. But, the catch is that, in order to reach Raghav, Ronny has to tackle a battalion of henchmen because Raghav stays in the well protected ‘layered’ building, whose each floor is also the domain of his extremely well trained henchmen. Does Ronny becomes successful in reaching Raghav despite all the odds, is he able to clear Sia’s misunderstanding towards him, does he become successful to avenge the killing of his Guruji and is he able to rescue his ladylove Sia from Raghav’s captive is what forms the rest of the film.

The story of the film is simple and caters to the masses, and this is where the film scores. The film’s screenplay (Sanjeev Dutta), which is loosely based on Hollywood flick THE RAID REDEMPTION, is decent and convincing. The way it establishes the characters and their respective characteristics is indeed laudable.

The film’s director Sabbir Khan, whose last film was HEROPANTI (Tiger Shroff’s debut film), does a good job with BAAGHI. The comfort level between Sabbir Khan and Tiger Shroff works in the favour of the film. The way in which Sabbir Khan has shot action sequences is praiseworthy. Given Tiger Shroff’s natural flair for action, the film looks very stylish and the person who needs to be credited for that is Sabbir Khan. In other words, Sabbir Khan has rightfully tapped Tiger Shroff’s biggest strength and forte: action. Despite good direction, the film suffers from some loopholes in the script. The film’s narrative is gripping though and has its strong moments. Even though the romance in the film is not well defined, the action sequences in the film more than makes up for the same.

As for as the performances are concerned, the film rides on the shoulders of the young guns, Tiger Shroff and Shraddha Kapoor. It is really nice to see Tiger Shroff playing to his (core) strengths. Besides his introduction scene in the film (which will surely be greeted with seetis and talis), his effortless action is a visual delight to watch. Like mentioned earlier, action being his forte, he is at ease in the film. The romantic chemistry that he shares with Shraddha Kapoor is decent. The way in which he flaunts his chiselled, well-sculpted physique with six packs uninhibitedly, gets him the brownie points (esp during the action sequences, which he has performed without the body double). With this film, he definitely takes the action level notches higher. Testimony to this are the scenes where he rescues the kid and followed by his confrontation with the villain. As for Shraddha Kapoor, she has definitely tried her level best to match upto the requirements of her character. Be ready to be surprised to see her throwing some punches in the extremely well choreographed action sequences. Besides looking extremely gorgeous, her endearing screen presence makes her and Tiger Shroff a beautiful on-screen couple. BAAGHI also heralds the arrival of a new baddie in Bollywood by the name of Sudheer Babu, an actor from down south. The way in which he conveys through his eyes and expressions is something to watch out for. With a hero like Tiger Shroff, who is so very powerful in action, the movie really needed a villain who could complement and match his antics. And Sudheer does an exemplary task of matching up with him in every frame. Besides making an impactful and terrific debut in the film, he is definitely an actor to watch out for. The veteran Sanjay Mishra’s comedy makes up for the light moments in the action movie. A special mention to Grandmaster Shifuji Shaurya Bharadwaj for his unabashed and raw screen presence. The rest of the characters help in moving the film forward.

Despite the fact that the film’s music (Meet Bros, Amaal Mallik, Ankit Tiwari, Manj Musik) is decent, it could have been a bit better. The lack of a chartbuster track is sorely felt in the film. The film’s background music (Julius Packiam) is brilliant and gives the movie it’s pace. A special mention to the film’s action directors by Kecha Khamphakdee and Javed-Aejaz who have done an excellent job. Do not miss the film’s penultimate 30-minute long action sequence that leaves you spellbound.

The film’s cinematography (Binod Pradhan) is top rate. The way in which he has presented the fabulous locales of Kerala and Thailand make the film nothing short of a visually stunning experience. On the other hand, the film’s editing (Manan Sagar) is tight.

On the whole, BAAGHI is a typical masala entertainer which scores high on action and performances from the lead cast. With focus on entertainment, the film is, without a doubt, the best action film to come out of Bollywood in recent times. It has all the merits to hit the jackpot. At the box office, it will be lapped up by the masses on the account of its masala quotient. Highly recommended.