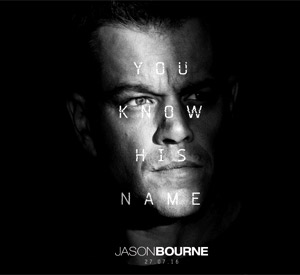 After the 2012 release THE BOURNE LEGACY, we see Matt Damon returning to reprise the role of Jason Bourne in the latest instalment in the Bourne franchise. Interestingly, the film will not only see Damon return as the central protagonist but will also feature director Paul Greengrass returning to helm the film. But will their return manage to revive the series that floundered in the previous film is what we are all set to analyse.

JASON BOURNE stars a decade after Bourne exposed Operation Blackbriar and disappeared, with him finally recovering from his amnesia and isolating himself from the world while making a living by taking part in illegal fighting rings. At the same time in Reykjavík, Nicky Parsons who has been collaborating with a hacktivist group, hacks into the CIA’s mainframe server in order to expose the CIA’s black ops programs. In the process, Parsons finds documents that concern Bourne’s recruitment into Treadstone and his father’s role in the program, and she decides to travel to Greece to find and inform him. Parsons’ system intrusion alerts Heather Lee, the head of the CIA’s cyber ops division, and CIA Director Robert Dewey. Parsons and Bourne meet in Greece, at the Syntagma Square in the midst of a violent anti-government protest. Though they evade the team sent to locate them, Parsons is killed by the Asset, an ex-Blackbriar assassin who also holds a personal grudge against Bourne, having been captured and tortured following the Blackbriar leak. Before she dies, Parsons is able to pass the key to a luggage locker that holds the CIA files on to Bourne. Intending to find the answers about his past and family, Bourne locates Dassault in Berlin in a bid to decrypt files that can help him find his way. Does Bourne finally get the details of his past that he has been searching for, will Lee manage to convince Bourne to re-enter the program, will Dewey manage to contain the situation and finally bump off Bourn, or will Bourne survive despite all odds is what forms the rest of the story.

Though nothing new can be expected from the story point of view, once again like the previous releases, JASON BOURNE follows Bourne as he hunts to find out his past that has evaded him till date. Matt Damon returning as Jason Bourne does have its share of charm, especially since Damon excelled in reprising the role of an amnesia stricken agent gone rogue. However, though Damon excels like before, he has visibly aged since the last time we saw him in this particular role, apart from that even the action sequences look similar to previous ones. From fist fights to car chase sequences, Damon and Greengrass have pulled out all the stops to recreate the Bourne feeling from the first three films. But this does little to keep the viewer gripped especially since it is nothing that they have not seen before.

Performance wise Damon is spot on, as well as the rest of the cast members. Tommy Lee Jones as CIA Director Robert Dewey, Alicia Vikander as Heather Lee and Vincent Cassel as the Asset are on cue. Talking about the action, though the sequences are well executed and thrilling to watch, they are nothing new. Another aspect is the fact that they are few and far between with much banter and set up going into the setup of each sequence. Save for these high octane sequences the film drags on with a cat and mouse game being played between the CIA and Bourne. Cinematography of the film by Barry Ackroyd is impressive with the bike chase sequences through the streets and by lanes.

On the whole, if you view JASON BOURNE as a standalone action flick it is pretty entertaining and makes for a good watch, but when compared to the previous films in the series, the film turns out to be just another run-of-the-mill Bourne flick.