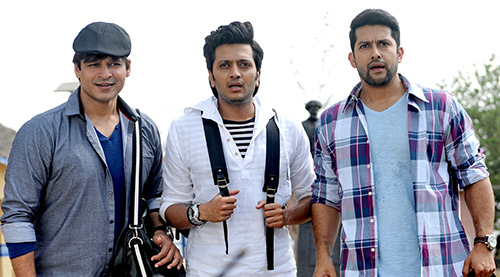 The recently released Great Grand Masti had to face severe repercussions after the film was leaked over a fortnight before its release date. Followed by the same, though there was legal action being taken against piracy, it has now been revealed that apparently the said copy was tampered with at the Film Certification Appellate Tribunal (FCAT).

Speculations are that the filmmakers submitted a sealed copy to FCAT but the copy found there was in a different folder with the original seal being broken. Vivek Oberoi, who plays one of the leads in the film, reinstated the rumour revealing that indeed the condition in which the film’s copy was found apparently looked like someone had opened the seal and put it along with other films and sealed it once again. Riteish Deshmukh, who too plays the other male lead in the film, further expressed disappointment over such acts and mentioned that it is unfortunate that it seems like a ‘Target Balaji’ act (indicating the previous leak of Udta Punjab). He also stated about certain conspiracy theories they have been informed of but maintained that he did not want to divulge any details to the media.