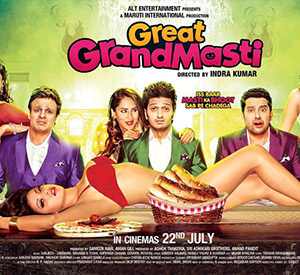 While it took a decade for makers of MASTI (2004) to continue the franchise of sex comedy with its sequel, it has hardly been three years that the third installment is all set to release. With controversies regarding its untimely leak followed by the bold and explicit content, does GREAT GRAND MASTI deliver what it promises – couple of hours of absolute rib tickling joy ride, let’s analyze.

Starting off in its usual manner of establishing a premise of three sexless marriages, the Masti boys namely, Meet Mehta (Vivek Oberoi), Prem Chawla (Aftab Shivdasani), Riteish Deshmukh (Amar Saxena) are trying to add some spice to their dead love lives but their attempts are foiled by the kith and kin of their respective wives’ families. Self-proclaimed godman, Antakshari Baba (Sanjay Mishra) and Amar’s mother-in-law (Usha Nadkarni)’s faith in him is a hindrance for Amar who is on a lookout for some fun with his darling wife Sapna Saxena (Pooja Banerjee). On the other hand, the childish and immature sister-in-law (Kangna Sharma) of Prem and her clingy nature to her sister and Prem’s wife Nisha Chawla (Shraddha Das) is a menace for Prem. Going ahead, the cross connection or rather the Judwaa experience between Vivek’s wife Rekha Mehta (Mishti) and her body builder brother (Ketan Karandhe) makes him stay away from his wife. Prem, a real estate broker by profession, decides to take a break from the mundane life and decides to visit the village, Doodhwadi along with his two best friends to get some ‘masti’ under the pretext of selling off the so called haunted and heritage bungalow of Amar. As the trio set out on this crazy journey, they encounter the sexy Shabari (Urvashi Rautela). As the three men try to woo her and gain her attention, they realize that this time their Masti is not with a human but a ghost who is longing for love and lust. As the three guys are trapped in the clutches of Shabari aka Ragini, the tale gets even further twisted when the wives of the trio decide to give a surprise to their hubbies. Will the three guys be able to escape or will they lose their life to the lustful desires of Ragini is what forms the rest of the plot.

The third instalment of MASTI as proclaimed by the makers, sort of resonates with the first film of the franchise where three guys are trapped by one girl’s charming ways. However, besides the basic plotline, the film doesn’t match up to the comedy quotient of the franchise. The biggest flaw lies with the script and its basic premise of a ghost running after the three guys. Also, while the reasons of husbands staying away from their wives seem bizarre, it fails to evoke laughter making this supposed to be spicy dish seem bland. However, a few scenes like the one where the trio mix Viagra in their food does manage to add some fun element that will make you smile, but the film fails to retain your attention span succumbing to predictability.

Whether it is subtle sex comedy of MASTI or the brutally explicit ones in GRAND MASTI, Indra Kumar managed to tickle your funny bone. However, the third installment which falls in none of the categories fails miserably. Flawed script and average direction add to the woes but the dialogues do manage to do the trick in a couple of scenes.

On the other hand, we must give it to the Masti boys, namely, Vivek Oberoi, Aftab Shivdasani and Riteish Deshmukh who seem to have mastered the art of playing Meet, Prem and Amar respectively. The trio’s comic timing is probably the saving grace of the film even though their humour seems to be over-the-top in certain scenes. However, none of the actresses manage to match up to their co-stars’ talent. Mishti, Pooja and Shraddha who play the wives fail to live up to the expectations and their acting seems to be little forced at certain points. On the other hand, while this was a great opportunity for Urvashi to showcase her comic side, her performance is strictly average. Certain other characters like Sanjay Mishra and Usha Nadkarni have delivered interesting performances. While Sonali Raut in her cameo too is average, Shreyas Talpade as Babu Rangeela does a decent job.

As far as the music (Sharib Sabri, Toshi Sabri, Superbia) is concerned, the title track is hummable but the other tracks including the sensuous Urvashi Rautela number ‘I Wanna Tera Ishq’ fails to register. The cinematography by Nigam Bomzan is average and the editing by Sanjay Sankla could have been crispier.

On the whole, GREAT GRAND MASTI fails to capitalize on the strong franchise value on the account of poor script which hardly offers any masti or entertainment to the audience. At the box office, its prospects appear extremely weak.