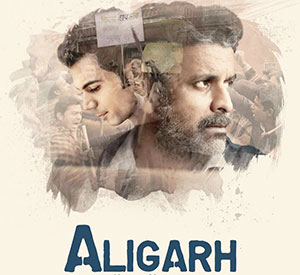 Many a times ‘Reel life imitates the real life’. There have been many instances wherein many a real life incidents have got translated into silver screen affair. With the Hindi film industry going through a transition, there are several film-makers who are attempting films based on real-life episodes. This week’s release ALIGARH also happens to be insured by a real life incident about a professor who was suspended from his job because of his sexual orientation. Will ALIGARH be able to shake up the Box-Office or will it succumb itself, let’s analyze.

The film starts off on the premises of Aligarh University, the very ‘Urdu dominated’ place where Prof. Shrinivas Siras (Manoj Bajpayee) happens to teach Marathi to the students. The film gradually moves onto capturing the ‘intimate moments’ between Prof. Shrinivas Siras and a rickshaw driver Irfan. The moment they get intimate with each other, two ‘reporters’ (who claim to be from TV 100 channel) do a sting operation on the duo. As Siras and Irfan get caught in the act, Dr. Zuber Khan, Dr. Firoz Majid, Dr. Shadab Qureshi and Prof. A. K. Murtuza from the university enter the room. Even though Dr. Shadab Qureshi (who also happens to be the college’s PRO) assures Siras that he will not leak his intimate video, he goes back on his words and tells the media all about the incident. The next day morning sees all the newspapers and channels screaming about Siras’ incident, which also results in a mob burning his effigies, human protests etc. All of this results in Prof. Siras being suspended from the college and gets told to vacant the quarters within a week’s time. Meanwhile, a young and ‘fire in the belly’ journalist Deepu Sebastian (Rajkummar Rao) starts writing about the case arming himself with thorough investigation, because he feels that Siras is not guilty and could have been framed. Initially, Siras is reluctant to speak to Deepu about the incident because the latter is a journalist. After a few meetings, Siras develops full faith in Deepu and he confides the whole incident that had taken place that night. While on one hand, Deepu goes all out to get justice for Siras, on the other hand, the court case against Siras only gets prolonged day after day. After days and days of struggle, when Deepu finally succeeds in being the ‘agent of change’ for Siras to get justice, a drunk Siras tells Deepu on the phone that he strongly feels that he should get settled in the US as that’s where people of his sexual orientation get accepted with open arms. Does Aligarh University accept back Siras the ‘tainted Chairman of the Linguistic Department’, does Siras finally get settled down in the US or is there anything more than what meets the eye…is what forms the rest of the film.

ALIGARH boasts of a wonderful and heartfelt screenplay Apurva Asrani (who has also written the story). One has to give it to him for handling an extremely sensitive topic in the most sensible manner.

The film sees the no holds barred directorial prowess of Hansal Mehta, who has handled the film in an extremely skilful manner. Thanks to his direction, the film gets translated into a mixed bag of emotions such as fearless, captivating, moving and heart-breaking one. While the film has an extremely engaging first half, the second half sees the film losing its grip mainly due to its slow pace and starts looking disjointed. Many things remain unexplained which may confuse the audience.

As for the performances, the film solely belongs to Manoj Bajpayee. Manoj conveys the humiliation, loneliness and pain brilliantly. He gets into the skin of his character so will that you can’t imagine anyone else in the part. ALIGARH marks yet another landmark performance from this supremely talented actor. As for Rajkummar Rao, he flawlessly adds tremendous credibility to his character. The rest of the film’s cast, Ashish Vidhyarthi and others, bring in their value added performances to make the film reach its goal.

While the film does not have any mainstream songs, it’s the background music (Karan Kulkarni) acts as an icing on the cake. While the film’s cinematography (Satya Rai Nagpaul) is superlative, the film’s editing (Apurva Asrani) could have been better as it could have worked miracles to the film’s narrative and progress, especially in the second half.

On the whole, ALIGARH is a sensitive film which will touch your heart. However, due to its slow pace, it may appeal to a very niche segment of multiplex audiences.