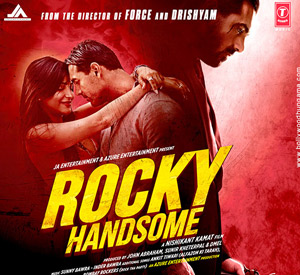 You aren’t quite sure about what to expect from the music of Rocky Handsome. Since it is a thriller with John Abraham, one could get to hear a Sanjay Gupta kind of a soundtrack. However,

there is a child in the middle of it all and hence there could be a sweetness element in there as well. Moreover, Shruti Haasan’s presence brings on a romantic appeal. Let’s explore what Sunny

Bawra-Inder Bawra, Bombay Rockers and Ankit Tiwari have to offer along with a horde of lyricists.

the years. This one is foot tapping and exciting all over again and brings on just the right beats. Moreover, given the stylish treatment that director Nishikant Kamat has lent to Rocky

Handsome, this one should fit the bill well.

Manoj Muntashir and Sagar Lahauri come together to write a romantic number ‘Rehnuma‘ which is sung quite well by Shreya Ghoshal. With a flute base to it, courtesy composer duo Sunny

Bawra-Inder Bawra, the song has a slow movement to it which brings on just the right kind of sensuality that was needed for the couple which is pretty much in love. Meanwhile, Inder also chips in

as a background vocalist.

Ankit Tiwari is quite selective when it comes to picking and choosing his songs. Here, he composes as well as sings Abhendra Kumar Upadhyay written ‘Alfazon Ki Tarah‘. Though the song

begins in quite an ordinary fashion, there is good crescendo that it reaches by the time hook-line sets in. The soft rock song tries to find a place in the ‘Aashiqui‘ genre, though not to

the optimum. One waits to see how it fits in the film.

A sad song comes next in the form of Sunny Bawra-Inder Bawra’s ‘Aye Khuda‘. A situational pathos filled track which is about the protagonist questioning God for giving him all the

pain of loss and separation, it has Rahat Fateh Ali Khan at the helm of affairs. The song is later repeated with Shreya Ghoshal joining in as well. Written by Sachin Pathak and Shekhar Astitwa, one

hopes that the song’s duration is curtailed in the film’s narrative so that it doesn’t slow down the narrative.

Sunidhi Chauhan rounds up the album with Sagar Lahauri written ‘Titliyan‘. A club track which is expected to play during a thrilling encounter on screen, it is situational, though

complimented well by a good theme sound that accompanies it right through.

As a film, Rocky Handsome isn’t expected to be a musical outing to begin with. In that aspect, whatever one gets to hear in the film is a bonus, as long as it doesn’t break the narrative.