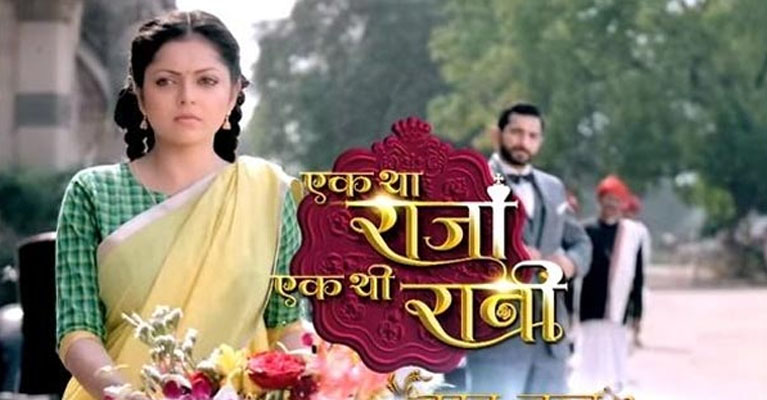 With abundance of similar concepts on Indian Television, this show manages to break the league and bring to the fore and interesting tale…

STORY SO FAR:
Set in the era of 1940’s, Ek Tha Raja Ek Thi Rani revolves around the royal family of Ameerkot. The story begins with the return of the king Rana Indravadan Singh Deo (Siddhant Karnick), after his valiant fight in the World War II.

His mother Rajmata (Anita Raj), the head of the family, eagerly waits for her son Rana Ji. When he returns home, circumstances make Rana Ji vision about the war and soldiers who lost their lives.
On the other side, there is an ordinary, innocent and chirpy girl Gayatri (Dhrashti Dhami) who makes her way to the library to get books through her brother’s identity card. Meanwhile, her worried mother Damayanti (Moon Banerjee) searches for her in the entire house.

Gayatri is a 21-year-old girl who is the daughter of a wealthy moneylender Seth Govind Das (Darshan Jariwala). The only concern about her parents is to get her married.

Rana Ji leaves for palace unaware of the bomb planted in his car. Though he manages to escape, there are a few people he indirectly warns for this regrettable incident. Ignoring this, as his procession makes way from the streets to palace, excited Gayatri dressed in her best attire rushes to the terrace to take a glimpse of the king.
Unfortunately, in her excitement, she accidently drops a flower pot before Rana Ji’s procession. This makes the horses go wild, but the king manages to take control. The guards try to search Gayatri’s house, but her brave behaviour helps her to stop the guards to conduct a search in their house.

On returning home, when Rajmata learns about the entire incident, she is left furious. She decides to confront the Gayatri’s father regarding this matter, but Rana Ji asks her to calm down. There is something about Rana Ji’s past that is bothering him… something that even makes Rajmata sad and worried about her son’s future.
Besides, how will Rana Ji and Gayatri meet? How will the romance between the duo brew? To know the answers, keep watching!
WHAT’S GOOD?

The makers of the show Ek Tha Raja Ek Thi Rani have made an impeccable effort to give the viewers a vintage appeal. Starting from primeval artifacts, vintage cars to plane, traditional attires, decor and palace, everything has been set as per the pre-independence era.
The ensemble cast of experienced actors captivates attention of the viewers.
The traditional attires would help people relate to the earlier times.
The chemistry between Gayatri and Rana Indravadan Singh Deo will be enthralling and the duo will soon become the sensational couple of television.
The combination of Gayatri’s chirpy nature and Rana’s seriousness seems to be perfect.

WHAT’S NOT GOOD?
With just a few episodes of the show, it will be difficult to pronounce what’s not good. As so far, the show looks intriguing.

VERDICT:
With abundance of similar concepts on Indian television, this show manages to break the league and showcase a fascinating classical love saga. It is a show one would love to watch with their family and enjoy some historical gossips. In certain situations, the nature of Rana Ji and Gayatri resemble Sonam Kapoor and Fawad Khan from the film Khoobsurat. Pegged as Indian television’s biggest magnum opus of the year, the show can exceed only if situations are not dragged and unrealistic situations are kept away.