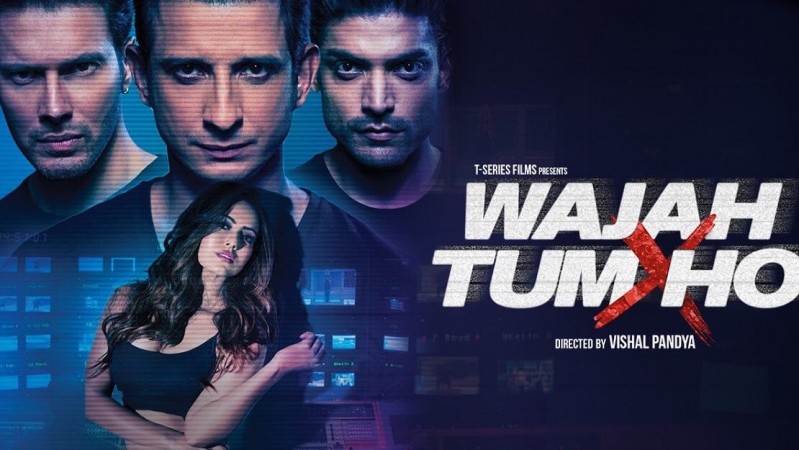 With the year 2016 almost coming to an end, Bollywood has seen films of almost every genre in the year gone by. This week sees the release of WAJAH TUM HO, a film that belongs to the thriller genre. Will this film ‘become the reason’ for its makers to smile their way to the bank, lets analyze.

WAJAH TUM HO is a film that mirrors the battle between money and power vis a vis love and emotions. The film starts off with the gruesome murder of a corrupt cop ACP Ramesh Sarnaik. Besides murdering him mercilessly, the entire ‘episode’ of the murder gets telecasted on GTN (Global Times Network), whose CEO happens to be the highly influential Rahul Oberoi (Rajneesh Duggal). As a part of the proceedings, a sincere Inspector Kabir Deshmukh (Sharman Joshi) enters the scene as the Investigating Officer, who spares no space for doubts in the case. Because the entire murder was telecasted live on GTN channel, Kabir suspects it to be a handiwork of Rahul in thirst of TRPs for his channel. On the other hand, Rahul Oberoi’s case gets represented by his extremely able legal head Sia (Sana Khan). Sia happens to be in love with lawyer Ranveer Bajaj (Gurmeet Choudhary), who also happens to be Kabir’s helping hand in the complicated case. After all the hitches and twists, just when Inspector Kabir thinks that he has been able to crack the murder case, two more people get murdered in the similar fashion as ACP Sarnaik. Despite the best of ‘legal brains’ on the job, the case simply refuses to get solved. Day after day, the case gets further complicated. Who are the other two people who get murdered and why, what ultimately happens to the love story between Sia and Ranveer and does Inspector Kabir become successful in solving all the cases is what forms the rest of the film’s story.

It is the film’s screenplay (Vishal Pandya, Sammeer Arora) which is gripping in parts. The unexpected thrills and chills not just enhance the screenplay, but also elevate the mood of the film. The film’s dialogues (Rashmi Virag) are simple and lucid, without resorting to any over-the-top lingo. In the same breath, a handful of dialogues do come across as cheesy and corny. Though one may find humour missing in the film, the film does have its share of (unintentional and situational) comedy, but, in minuscule proportion.

After having directed films like HATE STORY 2 and HATE STORY 3, Vishal Pandya returns with a decent product in the form of WAJAH TUM HO. He does a good job in putting together the whodunit murder mystery in WAJAH TUM HO. Without resorting to any beating around the bush tactics, Vishal Pandya dives into the subject from the first scene itself. The film’s tight and gripping first half sets the mood and pace of the film. The film starts sliding down in the second half (specifically in the last 20 minutes) of the otherwise decent film.

The film’s mystery remains intact and intriguing till the nail biting revelation. The revelation will keep the audiences guessing about the ultimate mastermind behind all the murders till the end. Even though WAJAH TUM HO may not keep you at the edge of your seat, it does keep you intrigued through its run time. Full points to Vishal Pandya for not just having built the film’s mounting suspense, but also for executing it decently.

As for the performances, the film harbours itself on the able shoulders of the ever-so-reliable Sharman Joshi, who forms the pillar of the film. After having done a decent role in 1920 LONDON (which released earlier this year), Sharman Joshi gives yet another good performance in WAJAH TUM HO. While on one hand, he exhibits his toughness as a no-nonsense cop, at the same time, he does full justice to his ‘role’ of a loving and caring single father.

He is followed a close second by the beautiful and confident Sana Khan. After having starred in the forgettable JAI HO, Sana Khan bounces back with a poised and dignified performance in WAJAH TUM HO. However, despite having a good and convincing screen presence, Sana does need to rework on her styling and body if she aims to be a Bollywood movie star. With his last film (BEIIMAAN LOVE) not doing well at the Box-Office, Rajneesh Duggal and his fans must have definitely pinned all their hopes on WAJAH TUM HO. Rajneesh Duggal does not disappoint with his role in WAJAH TUM HO. He delivers a restrained performance and does complete justice to what was expected of him in the film.

Gurmeet Choudhary, on the other hand does a decent and a ‘more prominent’ job in WAJAH TUM HO. He should be doing more challenging roles like this one in order to be in the Bollywood race. His chemistry with Sana Khan (mostly in the songs) is something that needs to be seen in order to be believed. Even though the entire film rests on the shoulders of the aforementioned cast, other cast members also do a decent job in taking the film forward.

The film boasts of some excellent music (Mithoon, Abhijit Vaghani, Meet Bros). Songs like the title track, ‘Dil Mein Chhupa Loonga’ and ‘Dil Ke Paas’ are already a rage all over. The visuals of the film only complement the tracks. One does feel though that the integration of ‘Maahi Ve’ is a bit forced in the film’s narrative. The film’s background score is taut and complements the film.

While the film boasts of decent cinematography (Prakash Kutty), the film’s editing (Manish More) is decent. The film could have been a tight thriller had the last 20 minutes of the film been chopped off.

On the whole, WAJAH TUM HO is a decent whodunit thriller with good amount of oomph, masala and entertainment value.