Anu Malik in ICU, to be discharged by Thursday 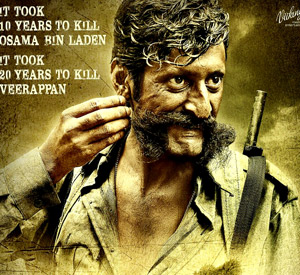 Till about a few years back, the whole of India was terrorised by a dangerous and merciless man named Koose Muniswamy Veerappan, who was commonly known as Veerappan or even the ‘sandalwood smuggler’. After having killed many people, police officers, animals (elephants, majorly), his reign came to an end during the year 2004. This week’s release is the Ram Gopal Varma directed VEERAPPAN, a film that has been inspired by the life of the dreaded Veerappan. Will VEERAPPAN make a ‘killing’ at the box-office or will it turn out to be a damp squib, let’s analyze.

The film starts off with the ruthless and brutal killing of police officers in the dense jungles of Satyamangalam, situated in the southern India. This is followed by a narration of flashback of events by STF officer Kannan (Sachiin J Joshi), wherein he traces the past of Veerappan and the incidents that led him to become the most notorious criminal ever. The flashback states that Veerappan made his first killing when he was in his pre-teens. Once he tasted blood and money (in that order), there was no looking back for him. Despite being an illiterate, his sharp mind and meticulous planning could put anyone and everyone to shame, so much so that, even the combined police forces of Karnataka and Tamil Nadu always landed up being unsuccessful in nabbing him. Looking at the recurring gruesome and heartless killings, the sole purpose of Kannan’s life becomes to nab Veerappan by hook or crook. During one such search operation, even though Kannan and his team become unsuccessful in nabbing Veerappan, they land up getting hold of his dutiful wife Muthulakshmi (Usha Jadhav). That’s when Kannan hatches a masterplan with Priya (Lisa Ray), who agrees to be a part of the plan, because Veerappan had killed her husband as well. As per the plan, Priya poses as a landlord of a big house, where Muthulakshmi is brought in as a tenant. Priya then, befriends her with her sweet talks and caring nature. As days pass by, Muthulakshmi falls for Priya’s sweet talks and gradually discloses the whereabouts of her husband Veerappan. Around that time, she also discloses many unknown facts about Veerappan’s life to Priya, who becomes shell shocked after knowing the bare facts. After knowing the truth about Veerappan, does Priya have a change of heart and pull herself off the masterplan, does Muthulakshmi really land up telling the whereabouts of her husband, does Kannan single handedly become successful in nabbing Veerappan when thousands of his fellow officers have failed and perished, is what forms the rest of the story.

Ram Gopal Varma, whose last Hindi/ Bollywood film at the box-office was the forgettable SATYA 2, makes a grand comeback with VEERAPPAN. One has to give it to him for having the confidence and the conviction in an off-beat subject like the life story of Veerappan. Unlike his earlier films, Ram Gopal Varma has adopted a rather guerrilla method in the narration of VEERAPPAN. Ram Gopal Varma should also be applauded for convincingly extracting human emotions from his characters, without going over the top. The film script (R.D. Tailang), is convincing and believable. Both, the script and Ram Gopal Varma’s direction complement each other. While the first half of the film builds up the story and the pace, the film’s second half dips slightly. Even though the film cannot be termed as a ‘visual masterpiece’, still, one does get to witness a handful of scenes that have been shot superlatively. The film has the most fitting climax, by all means. Full brownie points to Ram Gopal Varma for having flawlessly shot the scenes like Veerappan’s hideouts and the scenes towards the interval point. The climax of the film is as much fantastic and enjoyable, as much as the ultimate elimination scene of Veerappan.

As far as the performances are concerned, despite the film having an author backed role, the laurels oscillates between Sandeep Bharadwaj and Sachiin J Joshi. Sandeep Bharadwaj looks extremely convincing and resounding like the real Veerappan. Right from the mannerisms, expressions, body language and finer nuances, he scores from the word go. A special mention here goes to the veteran make-up artist Vikram Gaikwad for being responsible for the magical transformation of Sandeep Bharadwaj into Veerappan. On the other hand, Sachiin J Joshi excels in his role of a STF officer who lives with the sole aim of nabbing Veerappan. He exhibits aggression, angst, anger and helplessness in the most convincing manner, with a body language to match. While Usha Jadhav does a decent job with her character, Lisa Ray, who initially seems to be struggling with emotions, gradually becomes at ease with it. The rest of the film’s characters help in taking the film forward.

The film’s cinematography is top rate. The DoP (Aniket Khandagale) has done an exceptional job with the camera. Even though the film’s editing (Anwar Ali) is decent, one does feel that chopping away a handful of scenes from the film’s second half could have done wonders to the film’s narrative.

On the whole, VEERAPPAN has violence that may seem a bit over the top for a certain segment of audience. With its unconventional and extremely well-narrated story line and Ram Gopal Varma’s trademark filmmaking skills VEERAPPAN will most likely be patronized by a niche segment of the audience.