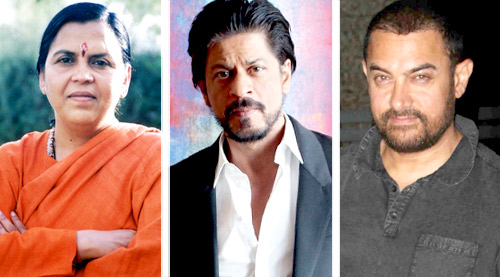 For all those who thought that the stars can get away be telling anything (recent example being that of ‘intolerance’), it’s time to think again. Union Minister Uma Bharati has now issued a warning to Shah Rukh Khan and Aamir Khan stating that, if they make an ideological statement that is wrapped in politics, then, they better be prepared for a reaction from the other side.

While naming actors like Aamir Khan, Shah Rukh Khan and even Saif Ali Khan alongwith four or five actors, she clearly stated that if an actor remained an actor, everybody would like them. But, when they (the stars) land up making an ideological statement that’s wrapped in politics, they better be prepared for a reaction. She also clarified that she did not mean anything about their (the stars’) right to speak.

While citing an example of Hollywood actress Angelina Jolie, she said that the actors should confine themselves to acting or branch out into social work like Jolie had done.