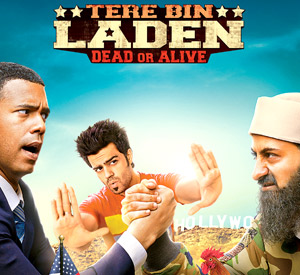 When you have an iconic film to live up to, it is always going to be an uphill task when you come up with its sequel. TERE BIN LADEN is one of the best films to have been made in the last ten years. Even though the theatrical trailer of TERE BIN LADEN DEAD OR ALIVE boasted of a lot of promise, the movie is a half baked entertainer that makes you chuckle at quite a few occasions but it doesn’t deliver a full throated laughter.

Sharma (Manish Paul) wants to become a film director and escapes from the clutches of his Halwai father to Bollywood. He meets Paddi Singh (Pradhuman Singh) who has an uncanny similarity with Osama Bin Laden and the germ of an idea pops up in his mind. He narrates a story idea to the silent producers Shetty sisters. ‘Tere Bin Laden’ starring Ali Zafar and Paddi goes on to become a big hit and a sequel is being planned. Scheming CIA agent David (Sikandar) turns into slimy Bollywood film Producer David Chaddha with a sexy assistant in Junior (Mia Uyeda) in tow. He is on the lookout for Paddi Singh. The dreaded Mujahid Khalil (Piyush Mishra) is also on the lookout for Paddi as well. Mayhem follows and even President Obama joins the cast too.

The movie is entertaining when you have the most unusual Olympics for terrorism. The mere idea is very funny. Piyush Mishra brings in the maximum smiles throughout the course of the film. He is first rate. The problem with the film is that it builds up excitement but then falls flat. Such is the story throughout the course of the film. Pradhuman Singh is a let down. He’s not exciting enough. Manish Paul plays himself. He makes you smile at times. There’s nothing substantial. Sikandar promised a lot during the promo but he is loud and over the top. Moreover his make up is too tacky. Ali Zafar in a cameo is wasted. Big time. The song ‘Six Packs’ that is picturized on him is atrocious to say the least. The extended cameo of President Obama was needless.

The screenplay is credited to Neha Sharma and Abhishek Sharma while dialogues have been written by Pradhuman. Writing is lackluster. Good in parts but average at most occasions. The dialogues are patchy too. When the references to weapons of mass destruction or Junior telling David, “I can blow your trumpet”, you know there’s intelligence at work. Piyush has punchy dialogues. But overall, a lot of forced humour is at work. Gags don’t work if the timing between the actors is missing. VFX are uneven too. The American Helicopter is created out of VFX and it is neat but most of the VFX apart from that are tacky. Chandan Arora’s editing is decent since the short duration of the film gives it a breezy feel. Chaudhary Amalendu’s camerawork is average. Dhruv Dhalla’s music isn’t worth writing about.

On the whole, TERE BIN LADEN DEAD OR ALIVE doesn’t live up to the first part. It offers you patchy entertainment. At the ticket window it will not enjoy an overwhelming word of mouth. If you don’t have anything else to do, you can check it out else wait for the satellite premiere.