Neerja to be screened at Georgetown University in USA 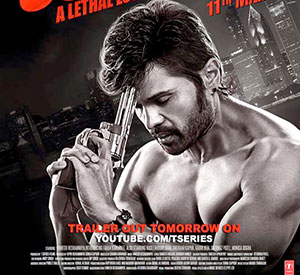 In Bollywood, even though there are stars and superstars, not many can boast of being an ‘all-rounder’. Himesh Reshammiya is one of the few who fall under the category of an ‘all-rounder’. Be it music composing, producing TV serials, judging music shows, acting in films and even producing them, Himesh Reshammiya has ‘been there done that’. He may have his share of admirers and adversaries within and outside the industry, but let’s face it, the man continues to score big as a musician and his movies have always been talked-about, evaluated and scrutinised feverishly (good, bad, whatever!) which, indirectly, hints at his popularity. Like him or loathe him, the fact is you can’t ignore him. After having tasted success with his debut film as an actor in films like THE XPOSE, AAP KAA SURROOR, Himesh Reshammiya is all set with the second installment in the ‘suroor’ series titled TERAA SURROOR. Will TERAA SURROOR create music at the Box-Office or will it bite the dust, let’s analyze.

The film starts off with a broad daylight murder of two individuals, which is followed by the ‘spot arrest’ of Tara Wadia Brownson (Farah Karimae) in a drugs case in Dublin. This is followed by a flashback of events that establishes Tara’s past with her present and the circumstances under which she was arrested. Knowing about her arrest, her would-be husband Raghu (Himesh Reshammiya) packs his bags and leaves for Dublin with a vow to prove her innocence and bring her back to India. But bringing Tara back is not at all as easy as he thought it to be. The rules and regulations of the Dublin jail happen to be so harsh that the jail authorities do not even allow Raghu to meet up with Tara, as per the law. That’s why Raghu immediately hires Elle Jardan (Monica Dogra), a well-known criminal lawyer in Dublin. On detailed investigation, Tara confesses to Elle that, she landed up in Dublin because of a certain ‘Aniruddh Brahmin’, her Facebook acquaintance, who invited her to perform on ‘India Day’ in Dublin. And when Elle tells her that there is no such day that exists in Dublin, the search then begins for the mysterious Aniruddh Brahmin and the reason as to why he implicated Tara falsely in the drugs case. That’s when Raghu comes across Enrique Santiago aka ‘The Bird’ (Naseeruddin Shah), known for his innumerable jail breaks and who charges ‘per word’ for his advice (read techniques) on jail breaks. Enrique then chalks out a plan for Raghu, which, if not executed in 20 minutes, will prove to be a fatal disaster for both Raghu and Tara. Will Raghu be able to execute the jailbreak plan in a mere 20 minutes for his ladylove Tara, does Elle become successful in proving Tara’s innocence in the case, who is the real Aniruddh Brahmin and what was the reason behind him falsely framing Tara in the drugs case is what forms the rest of the story.

The film’s director Shawn Arranha, who has, in the past, directed Hide & Seek, (comparatively) springs a surprise with TERAA SURROOR. His direction in building the suspense keeps you on the edge of your seat till the end. One has to give it to him for having successfully directed Himesh Reshammiya and extracting a performance from him. Certain scenes in the film stand out completely (like the introduction scene of Naseeruddin Shah is simply fantastic and the way the suspense gets unfolded is something that needs to be applauded). Having said that, one does feel and realise that even though the film’s story may not boast of novelty (it could have been much better), it does keep the viewer engaged till the end and how! On the negative side, the film’s pace in the first half acts as a villain (‘drags endlessly at places’). Scenes like the escape from Ireland to Mumbai could have been explained in a better manner. If that wasn’t enough, even the ‘infusion’ of too many songs in the first half slows down the pace of the film. It’s only in the film’s second half that we get the answers to all the mystery. Overall, the film’s screenplay could have been tighter which is a must-need in suspense thrillers.

As for the performances, the film totally tends to rest on the shoulders of Himesh Reshammiya. Unlike his earlier ventures, after THE XPOSE, Himesh has again played into the suspense-thriller genre with TERAA SURROOR. The film sees him immensely improving in the acting department and one can safely say that he has acted better than his previous movies. His attempt to ‘get into the skin of the character’ really shows on the screen when we see him flaunting a toned body as per the requirement of his character. He appears slim and trim (he has lost weight for the part) and also carries his character with conviction. While the content may not appeal to universal audience, let’s not forget the fact that the TG of the movie is Himesh Reshammiya’s fans who will lap up the proceedings with equal enthusiasm. Besides him, there’s the model-turned-actress Farah Karimae, who makes her debut with this film, is a delight to watch. Besides looking good, she has acted decently in the limited canvas which was provided to her. Besides them, there is the powerhouse performer in the form of Naseeruddin Shah, who, yet again proves as to why he is a safe bet for any film maker. His portrayal of a ‘smooth-operator criminal’ is simply magical. The trio of Kabir Bedi, Shekhar Kapur and Monica Dogra, despite their brief roles, deliver decent performances. One does feel that their characters could have been defined a bit more clearly. A special mention to the person who plays the villain in the film.

A special mention for the film’s DoP (Maneesh Chandra Bhatt), for not just the film bearing an upscale and glossy look, but also for successfully capturing the foreign locales (Ireland) exceedingly well on celluloid. On the other hand, the film’s editing (Aashish Gaikar) is just about average.