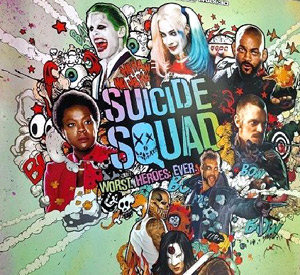 Earlier this year we saw what happens when some of the best superheroes team up together to fight evil with the release of AVENGERS 2. Well now in SUICIDE SQUAD we see a different kind of union forming with some of the most notorious and deadly villains joining forcers against a larger evil that threatens to doom the human race. But will this band of unlikely anti-heroes manage to hold the audiences’ attention the way the superheroes do, will they forsake their oath to help each other and escape their captors, or will they eventually emerge as a force of good to reckon with is what we analyse.

The film starts off in the aftermath of Superman’s death, with intelligence operative Amanda Waller assembling a team of dangerous criminals – the deranged Harley Quinn; elite hit man Deadshot; pyrokinetic ex-gangster El Diablo; opportunistic thief Captain Boomerang; monstrous cannibal Killer Croc; and specialized mercenary Slipknot, placing them under command of Colonel Rick Flag, to be used as disposable assets in high-risk missions for the United States government. Each member has a small bomb implanted in their head, designed to detonate, if any member rebels against Flag. One of Waller’s recruits is Flag’s girlfriend, Dr. June Moone, an archaeologist who is possessed by a spirit witch known as “Enchantress” after touching a cursed idol, and who quickly spirals out of control, besieging Midway City with a horde of monsters and nesting on a subway station, where she forces a commuter to become the host for her brother, Incubus. Waller then deploys the squad to extract a high-profile mark from Midway, and Flag alerts them that Enchantress’ heart must be cut out of her to regain control of her. Before the squad embarks on their mission, they are joined by Katana, a warrior who wields a mystic sword and acts as Flag’s bodyguard. Harley’s lover, the Joker, finds out about her predicament and tortures one of Waller’s men into leading him to the facility where the nano bombs are made. The Joker has had the wife of one of the scientists involved in the program kidnapped to blackmail him into disabling Harley’s bomb. In the meantime, the team who have fought their way to the location of the hideout learn that their mark is Waller herself, who is attempting to cover up her involvement. The squad escorts Waller to the rooftop for extraction, but the arriving helicopter has been hijacked by Joker and his men, who open fire on the squad and disable Harley’s bomb, allowing her to climb aboard. However, the helicopter is shot down by Waller’s men, and Harley jumps out while Joker seemingly perishes in the explosion, after which Harley rejoins the squad. Alerted to Waller’s whereabouts, Enchantress’ minions arrive and kidnap her. With Waller compromised, the squad decides to abandon the mission, while Flag chooses to continue. Realizing they have an opportunity to prove themselves, they soon join him and locate Enchantress and Waller at the partially flooded subway station. From here on begins the fight between the motley squad of one time villains against Enchantress and her brother. Will the Suicide Squad emerge victorious and prove themselves worthy of redemption or will they fall victim to Enchantress’ visions and eventually wither away.

The film begins with each of the characters being introduced as Amanda Waller and Flag visit Belle Reve Penitentiary on a recruitment drive. Director David Ayer wastes no time in stretching out each introduction, instead he dives headlong into the throes of the film’s story revealing parts of each character as the film progresses. Talking about progression, the film has a rather quick pace with plenty of action sequences every now and then. Though these sequences are well planned and executed, they do not come close to the ones we saw in previous superhero films. The film was planned to resemble a GUARDIANS OF THE GALAXY or THE AVENGERS series especially with the action, story build up, and background but the viewer can’t help but realize that the film falls short of being what was expected. Another moot point are the dialogues, the rather lame one liners that seem to be placed within each character’s speech come across as pointless insertions made to be used in the trailer. Even the jokes are more often than not misplaced and just not worth a laugh. However, what works for the film is the CGI that is on par with some of the most extravagant visual experiences that we have seen in the recent past. This coupled with the high octane, bullets flying, swords-slashing action retains the viewer’s attention for a while yet falls short of getting one hooked to the film. Characterization and development of the villains Enchantress and her brother Incubus are brilliant. Their look does give the viewer a feel of an ancient yet deadly power that has awoken in the 21st century to reclaim their position as gods.

Coming to the performances in SUICIDE SQUAD, Margot Robbie as Harley Quinn is much better than what she was in THE LEGEND OF TARZAN, however, unlike her appearance in the trailer which gave a feeling that she would most definitely be a central protagonist with more screen time she is more often than not resigned to playing a crazed girl visible on the fringe of the action. Will Smith as Deadshot does a decent job, however the makers’ idea of giving his character emotional ties seems to lessen his overall menace as being one of the most feared assassins. Jared Leto is strictly OK for the amount of screen time he got, (spoiler) if you are looking a Joker playing a major/ integral part of the film, you are in for a let-down considering that he is present in the start and then towards the end. Joel Kinnamann as Rick Flag is convincing while Cara Delevingne as Enchantress is really good, her mannerisms and overall look does send a tingle down your spine.

Overall, SUICIDE SQUAD comes across as a film made for the DC Universe fans who in all likelihood will lap up the film. However if you are not one, the film will feel like multiple action sequences that have been strung together with a reasonable story line to form one feature film.