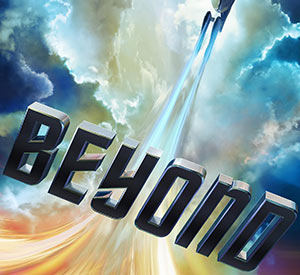 Back in 1966, we saw the first of its kind space adventure series hit the small screen with the arrival of Star Trek. Created by Gene Roddenberry, the franchise soon acquired a cult status with fans across the globe. Despite spins off and divergent stories over the years, Star Trek has retained its essence of being a tale of space exploration. Now years on, we see the release of STAR TREK BEYOND which is the sequel to the 2013 release STAR TREK INTO DARKNESS.

Much like the series that spoke of different adventures in space, STAR TREK BEYOND too is one episode from the journal of Captain Kirk and the crew of The Enterprise. The story begins with The Enterprise being two and a half years into its five year mission, when the ship arrives at Starbase Yorktown to replenish dwindling supplies while the crew takes shore leave. Finding his duties as Captain growing monotonous, James T. Kirk applies for a promotion to Vice Admiral. Meanwhile, Commander Spock and Nyota Uhura deal with the end of their relationship; Hikaru Sulu reunites with his partner and daughter; and Montgomery Scott struggles to keep the ship operational. Meanwhile an escape pod drifts out of a nearby nebula and the sole occupant, Kalara, claims her ship is stranded and damaged. The Enterprise is dispatched, but when it arrives at a planet on the far side of the nebula, it’s crippled by a swarm of ships and boarded by drone soldiers led by Krall, an alien warlord. Krall attempts to retrieve an alien artefact – supposedly part of a long-lost weapon – from the Enterprise’s storage, but Kirk gets the artefact first. In the ensuing battle, the Enterprise is badly damaged and as the crew evacuates, most of their escape pods are captured by the drone ships. With the crew as hostages, Krall looks to convince Captain Kirk to hand over the artefact, only to realise that it was within his grasp all the while. Now armed with the weapon, Krall sets course for Starbase Yorktown with the sole objective to capture it and fight the Federation.

Picking off after the previous film, STAR TREK BEYOND features Captain Kirk back at the helm of the USS Enterprise with his trusted friend and lieutenant Spock by his side. Much like the earlier film this one too is a space adventure of mammoth proportions, while the first half of the film sets up the premise for the story detailing each of the characters’ lives from where we last saw them, it boasts of some inspiring visuals. However, along with the visual treat and action there is a lot of banter between the characters. Though at times this constant jabbering drags, it does take the story forward explaining the reasoning behind the crew’s next move. Here a special mention goes out to director Justin Lin who keeps the proceedings crisp and snappy. In fact each time the viewer feels dragged down by the banter there is always an adrenaline pumping sequence that comes just after, making for a ride with well interspaced highs and lows. As Simon Pegg along with Dough Jung has developed the screenplay for STAR TREK BEYOND, there is the comic element that you expect from Pegg both the in film, but these are few and far between.

Coming to the cast of the film, Chris Pine as Captain James T. Kirk is his usual self, keeping in form with what we saw in the previous film, similarly Zachary Quinto as Commander Spock, Karl Urban as Doctor ‘Bones’ McCoy, Simon Pegg as Montgomery ‘Scotty’ Scott and Zoe Saldana as Lieutenant Uhura are as expected. Each of the cast members bring in their own essence to their respective characters while still managing to retain the feel and mannerisms that we have seen in the series. Idris Elba has time and again proved his mettle at playing deep brooding characters who have a sense of doom around them, and once again as Krall Elba has done well. However, though his character does instil a sense of dread, the overall fear and menace seems diminished. With a backstory like his, Elba’s character should have featured a little more menace considering that all he has ever known was war and pain.

Talking about the visual effects of the film, STAR TREK BEYOND features some really good action sequences with high voltage explosions and crashes. Unlike the previous film that feature all too many lens flares that kind of spoiled the show, this one uses the same technique but in a much more eye pleasing manner. The development of the uncharted nebula system and an alien planet that quite resembles earth, along with the happenings on screen keep the viewer gripped. With a fast paced story (save for the few times in the first half where there is more talking) STAR TREK BEYOND is brisk.

On the whole, STAR TREK BEYOND has both heart and action coupled with the aura that continues from the previous films, which makes it an entertaining film and definitely worth a watch.