This Latest Promo of ‘Beyhadh’ will give you goosebumps! 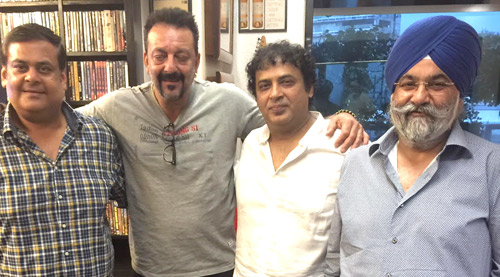 While there have been several speculations about Sanjay Dutt’s forthcoming films after his release from prison, here’s news about the actor’s film which will deal with social issues. Raju Chadha, Chairman of Wave Group has signed Sanjay Dutt in award winning director Girish Malik’s next titled Torbaaz.

We hear that Sanjay loved the script of the film and immediately gave a go ahead. Dutt has been taking his time to finalize his new slate of films, turning ‘choosy’ as the Bollywood lingo goes. When quizzed, he confirmed saying, “I am keen to be a part of films that are highly content driven. I want to create a memorable slate of films for my fans.”

Torbaaz is based in Afghanistan and is a story about child suicide bombers of Afghanistan, who have been trained to believe that killing is a virtue and glory is in afterlife. Sanjay Dutt plays an army officer in the film who wants to give these ‘children of war’ a ray of hope. It marks the coming back of a man who has lost everything in life. “I’m amazed at how easily and organically Sanju got into the world of Torbaaz. He is a very intelligent and evolved actor who has so much to offer. He was the first choice for me, Rajuji & Rahul”, said Girish.

Rahul Mittra, filmmaker & CEO Wave Cinemas said, “It would be a complete surprise for the audiences to see Sanjay Dutt depicting a character that strives to bring change in a world that is torn by generations of war and bloodshed. It is a complex subject which requires a lot of homework and preparation. We are aiming to go on floor by 2017.” The idea of the film took germ in the mind of acclaimed cricketer Rameez Raja, who got in touch with Malik after watching his first film Jal, to put it on screen.

Presented by Wave Cinemas, Ponty Chadha in association with Raju Chadha, Torbaaz spreads reformation, not just in action but in the minds of children. Coming up with such a hard-hitting subject woven with the game of Cricket, Wave Cinemas intends to create world class cinema. The film will be shot at foreign locales & will be co-produced by Girish’s Clapstem Entertainment along with partner Puneet Singh.