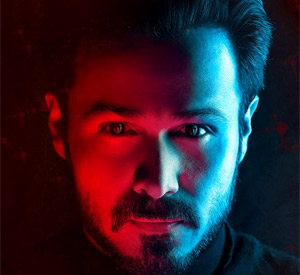 It all started off in the year 2002 when Vikram Bhatt directed the spooky thriller RAAZ starring Bipasha Basu, Dino Morea and Malini Sharma. The film’s unprecedented success gave way to ‘subsequent’ films in the form of RAAZ: THE MYSTERY CONTINUES (2009) and RAAZ 3 in 3D (2012). This week’s release is the next instalment of the RAAZ series titled RAAZ REBOOT that stars Emraan Hashmi, Kriti Kharbanda and Gaurav Arora in the lead roles. Will RAAZ REBOOT prove to be a ‘Raaz-mataz’ hit at the Box-Office or will it have to ‘reboot’ itself, let’s analyze.

Vishesh Films and T-Series’ RAAZ REBOOT is essentially a horror film that explores many mysteries, secrets, human traits and evils. The film starts off with a voiceover narration about love and life amidst the picturesque locations of Romania. It is here where the married couple Rehaan Khanna (Gaurav Arora) and his wife Shaina (Kriti Kharbanda) have recently moved in. Post that, the film enters into a semi flashback of events that mirrors Rehaan’s resistance and reluctance of shifting his base to Romania. Because of Shaina’s insistence, Rehaan gives up his ‘average job’ in Mumbai and settles for a plush and high flying corporate job in Romania. But, ever since the time they shift to Romania, Shaina senses something amiss between Rehaan and his approach towards her. When repeated questioning yields no answers, she becomes extremely sad and disheartened. Amidst all this, Shaina starts witnessing eerie and weird things happening in her house. And when she tries to explain all this to Rehaan, he rubbishes Shaina’s claims of the presence of evil spirit in their house. That’s the time when a depressed and longing for love Shaina comes across the fashion photographer Aditya Shrivastava (Emraan Hashmi). Aditya, not only understands her situation, but also offers help in overcoming the evil happenings in her life. One day, when Rehaan goes outstation for work, Aditya meets Shaina to tell her a shocking secret that leaves Shaina totally helpless and shocked. Does Aditya actually tell Shaina the reason behind the evil spirit attacking her, why is he helping Shaina in an unknown land and does Shaina and how is Rehaan related to all this, is what forms the rest of the film.

When RAAZ REBOOT’s trailers got released, it definitely upped the curiosity factor amongst the audiences. And the film does not disappoint. Even though RAAZ REBOOT’s screenplay (Vikram Bhatt) gets into the cliched space at times, it is definitely tight and gripping. It successfully manages to keep the audiences engaged and hooked to the film till the end. And it is purely because of this that the attention of the audience refrains from dwindling till the end. The film’s narrative is simple and lucid. The film does have a handful of memorable and hard hitting dialogues (Girish Dhamija), mostly in the second half.

Even though RAAZ REBOOT’s premise happens to be its director Vikram Bhatt’s favourite territory, there are a handful of things which seem amiss in the film. Even though his direction starts going a bit astray somwhere in the middle, he manages to hold the film together. While the film’s first half is slow, the second half picks up with the horror and mystery elements kicking in. However, the film misses the presence of sex element, which is the forte of the Bhatts and movies belonging to this genre. Having said that, one has to make a special mention about a handful of scenes in the film that really stand out. Like the scene when Kriti runs back from her shopping to her house and her ‘confrontation’ during the recitation of shlokas, during the exorcism.

After having starred in the earlier RAAZ films (RAAZ-THE MYSTERY CONTINUES and RAAZ 3), Emraan Hashmi definitely seems tad comfortable in his ‘home turf’. Despite the fact that one starts feeling a bit letdown and disappointed with the lack of ‘Emraan-isms’ in full throttle, still, he manages to do total justice to his character and brings in the much needed pace in the narrative. Do not miss his confrontation scene with Gaurav Arora. Speaking of Gaurav Arora, he delivers a convincing performance in the film. RAAZ REBOOT might just prove to be a springboard for his future in Bollywood. However, the biggest surprise of the film is Kriti Kharbanda. Armed with an endearing screen presence and strong performance in the film, she could just be the name to watch out for. Even though RAAZ REBOOT is her debut film in Bollywood, she just does not come across as a debutante actress. While the film essentially belongs to the aforementioned trio (Emraan Hashmi, Kriti Kharbanda, Gaurav Arora), the other actors simply help the film in moving forward.

The music of RAAZ REBOOT (Jeet Gannguli, Sangeet Haldipur, Sidharth Haldipur) is hummable and is bound to find its musical resonance with the audiences. On the other hand, the film’s background score (Raju Singh) and sound effects are totally in sync with the film’s narrative and add to the chills of the movie watching experience.

The film’s cinematography (Manoj Soni) is decent and nothing short of a visual delight. The film’s editing (Kuldip Mehan) is average.

On the whole, RAAZ REBOOT offers an unconventional horror story that will leave you haunted and scared. If you are an enthusiast of supernatural thriller/horror movies, get ready to be shocked and surprised with this one.