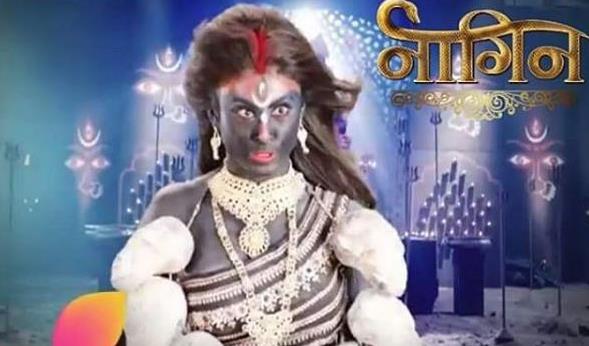 One of the most awaited moments on television today is the season finale ofNaagin!
The Colors show took the small screen by a storm ever since its launch, with TRP’s soaring new heights of success week after week. Starring Mouni Roy,Arjun Bijlani , Sudha Chandran and Adaa Khan as the central characters,Naagin will air its season finale episode on June 4 and 5!
Now that Shivanya has transformed herself into an ‘ichaadhari naagin’ once again… Adding unconventional twists in the Naagin tale, the channel has aired an exciting new promo where the truth will finally triumph over evil.
About the promo:
The promo showcases Shivanya and Shesha spitting a fireball, due to which the prestigious naagmani’ gets awakened from inside the planet. Shesha finally gets her hand on the naagmani’ and within a jiffy, the promo streams to showing Shivanya taking the form of the fierce destroyer of evil in order to end Yamani’s (antagonist) life.
Looking at her ferocious avatar as Goddess Kaali, Yamini shivers in fear as Shivanya promises that she will end her life in a way that no other enemy would dare commit a crime again. And just like how Kaali went on a rampage of wrath and destruction and ended up stepping on her husband Shiva, Shivanya too will be seen following the suit.
Take a look at the promo below:

Review:
Shivanya has slayed her loyal fans by trying a different look time and again. The last time, we were mind blown watching her groove to the coarse drums play in the ‘Tandaav’ sequence. She is undoubtedly one of the sexiest actresses on Television and knows perfectly how to get into the skin of every character, keeping the ‘oomph’ factor at its peak!
This time as Goddess Kaali, she manages to spellbind the audience with her boisterous character, particularly when she mistakenly in rage steps on Rithik and literally roars out of anger and guilt! The moment left us shaken for at least a few seconds.
As for the show, the script writers are at their best and we definitely want to see how the show culminates only to eagerly wait for the opening episode of the second season! Talking about the VFX and animation, we feel that a little more efforts would have made the scenes more visually appealing. Random background scores crop up in the middle of the already continuing score. Its cinematography and camera angles surely contribute to the interest of the viewers but there could have been a better treatment when it comes to editing.
To sum it up, the promo is enticing and will surely fetch a lot of curious eyeballs!