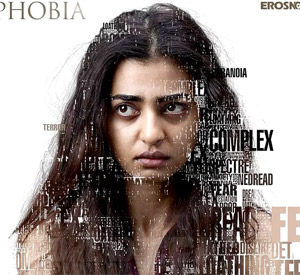 Radhika Apte has delivered a National Award winning performance in Pawan Kirpalani directed Psychological Thriller PHOBIA. Radhika is so effortless and so much in control of the extremely difficult character that as a viewer you’d find it stunning. Writers Pavan Kirpalani, Pooja Ladha Surti and Arun Sukumar web an intriguing screenplay that keeps you riveted through the course of the film and the ending surprises you to no end as the ambiguous dots get connected in a surreal manner. In spite of cinematic merits, PHOBIA is not everyone’s cup of tea. It is not your regular entertainment and has a niche appeal.

Mehak (Radhika Apte) is a vastly talented Artiste. She meets with an unfortunate mishap that traumatises her to a great extent. It is discovered that she is afflicted with agoraphobia. It is a phobia where the patient is paranoid about going in public places, especially marketplace. Shaan (Satyadeep Mishra), a close friend takes the responsibility of Mehak and takes her to a friend’s house. Mehak was having issues with her sister and her family due to her panic attacks. Mehak had issues with Shaan too. The fact that she was an artiste with a vast imagination was getting compounded by the fact that she was imagining things that didn’t exist. Or did they exist? Mehak befriends Nikki (Yashaswini), a neighbourhood college going girl who was an adrenaline junkie. Manu (Ankur Vikal), another neighbour was a weirdo who had been working on his anger management issues by being a part of a community laughter club. Mehak develops serious allegations against Manu and what follows is a series of mishaps. Sometimes the circumstances become unlikely villains. Kafka’s quote in the initial credits sums up the experience very aptly: A cage went in search of a bird.

Director Pawan Kirpalani smartly weaves a thrilling story. Every scene has a deeper meaning and relevance. The screenplay stays true to the context. Nothing is out of the place. There are several scenes which are disturbing but then there are a few scenes which end up as humorous in spite of the thrilling built up (it isn’t unintentional, it is part of the plan).

Radhika Apte is sensational as the helpless Mehak who grapples with her phobia as well as her vacuous loneliness. She’s fierce, vicious, vulnerable, aggressor and a victim at the same time. The best part is that her histrionics are devoid of the pathetic horror tricks that a few of our horror experts employ on a regular basis. The physicality of Apte’s acting is emanating from a psychological space and it is very creditable. Satyadeep Mishra is terrific as the guy who’s grappling between being a friend and a lover. He’s very realistic and human. Yashaswini as the young college going inquisitive but good hearted girl is an absolute Natural. She adds to the conflict beautifully. Ankur Vikal as the weird Manu does full justice to his role.

Jayakrishna Gummadi’s cinematography is engaging and surprising at many a juncture. You are treated to 3D impact without the scene actually being filmed in 3D. Pooja Ladha Surti’s editing is taut and the sharp duration of the film is a big highlight. There’s one song in the film, ‘Roke Na Ruke‘ (composer: Daniel George, singer: Sakina Khan and Sidharth Basroor) and it is a catchy light-hearted number. Karan Gaur’s Background score is chilling and creates the desired impact.

On the whole, PHOBIA is a well-made taut thriller with an amazing performance by Radhika Apte. However the in film blood and gore may not be to everyone’s liking affecting the film’s overall box office prospects as it will appeal to a rather niche audience. Another factor that may affect the film is the low key promotion of the film due to which many people aren’t aware of PHOBIA’s release. But for them who have an appetite for the unconventional thrills and psychological mind games, don’t miss PHOBIA.