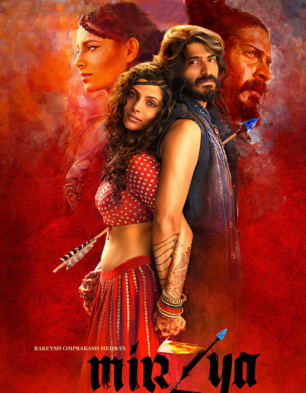 By now, everyone knows that the most important day in Bollywood is Friday, as it’s this day of the week that makes or breaks many a dream. This week’s release MIRZYA marks the debut of Anil Kapoor’s son Harshvardhan Kapoor alongwith Saiyami Kher. Will MIRZYA see the ‘son-rise’ of Harshvardhan Kapoor and catapult the debutantes into superstardom or will it spell doom at the Box-Office, let’s analyse.

Rakeysh Omprakash Mehra’s MIRZYA is essentially an epic love story set during the contemporary times. The film starts off with the introduction of the childhood of Munish (Harshvardhan Kapoor) and Suchitra aka Suchi (Saiyami Kher). The duo not just go to the school together, but also, sit on the same bench and help each other every time in need. One day, when the school teacher asks Munish for his homework, Suchi lends him her copy. And when Sir asks Suchi for her homework, she says that she had not done the homework. And because of this, the teacher hits her with a cane. Unable to bear the sight, Munish lands up robbing the gun from Suchi’s (police officer) father and shoots the school teacher dead in broad daylight. After that, despite being sentenced to a juvenile remand home, the compulsive thoughts of Suchi make Munish run away from there. Meanwhile, Suchi and her father leave Jodhpur forever and shift to a new location. After a few years, a grown up Suchi returns from abroad only to be received by her fiancé Prince Karan (Raj Chaudhary). Incidentally, Munish (who now lives a ‘changed life’ as Adil Mirza) works in the horse stable of Prince Karan and starts teaching horse riding to Suchi. Munish recognizes her but does not reveal his true identity to her till she guesses who he is. The two fall in love again, but things are very different now as compared to their childhood. Does Munish confess his love to Suchi, does Suchi go ahead with her marriage with Prince Karan and does Munish and Suchi gather the courage to stand up against the world to fight for their love, is what forms the rest of the film.

When the promos of MIRZYA were released, it gave the audience a stunning visual experience of a love story set in two different eras. The film, sadly, just does not live upto the expectations that one has from a Rakeysh Mehra film. The film’s screenplay (Gulzar) is bizarre, confusing and extremely slow paced, to say the least. It is really saddening that to see a cinematic genius of Gulzar’s calibre and stature could go so very tremendously wrong with a classic love story. The film’s dialogues (Gulzar) are very average and leave absolutely no impact on the audience.

MIRZYA, in totality, runs on three tracks. Firstly, it’s a real time love story between Munish and Suchi, second, the folklore of Mirza-Sahiban (visually heavily inspired by The Game Of Thrones’ ‘Khaleesi’ track) and thirdly, an abstract bunch of folk dancers who look eternally high, sexually overcharged and randomly break into provocative dances. All of this land up becoming an intangible proposition for the audience to digest

Besides Gulzar, MIRZYA’s director Rakeysh Omprakash Mehra (who has to his credit films like RANG DE BASANTI and the more recent BHAAG MILKHA BHAAG), is equally to be blamed. The irony of the situation is that, even though Rakeysh Omprakash Mehra knows the pulse and the taste of today’s audiences, he lands up making a mess out of MIRZYA, which was supposed to be the launch pad of two new faces and careers. Rakeysh Omprakash Mehra’s direction in MIRZYA is not just poor, but completely ‘directionless’. Besides the film’s weak narrative, there are way too many loopholes in the film and many unexplained events and situations. All of this leads to the audiences being confused and puzzled by the time the film ends. While the first half is all about the ‘set-up’ of the couple’s romantic saga, the second half drags endlessly without a cause and a pause. The film sees Rakeysh Omprakash Mehra randomly ending every crucial scene, only to get enveloped by a musical track with Daler Mehendi’s high pitched tone. If that wasn’t enough, there are certain scenes that, besides making no sense, land up testing your patience with Om Puri’s voiceover that constantly states “Hota Hai, Hota Hai, Ishq Mein Aksar Aisaa Hota Hai”, in a way hinting that even the makers somewhere knew what they are showing is just illogical. All of this forces the viewer to wonder as to what exactly was going on in the mind of Rakeysh Omprakash Mehra and what was he trying to convey through MIRZYA. Although the plot of MIRZYA (rich girl-poor boy-disapproving parents) has been attempted umpteen times before in Bollywood, MIRZYA offers absolutely no novelty (in the form of twists and turns) in the film. The film, in totality, looks completely lifeless and falls flat on the face.

As for the performances, the film rides totally on the shoulders of its lead pair Harshvardhan Kapoor and Saiyami Kher. Harshvardhan Kapoor shows promise as a debutante and is at ease in front of the camera. He tries to do justice to his half baked character with all that he has and manages to look confident on screen. Considering the fact that, Saiyami Kher has done a handful of modelling assignments before, she seems quite comfortable (in front of the camera) as a newcomer. She has an endearing screen presence with a confident body language and looks extremely gorgeous. She too seems very promising and should be an actress to watch out for in Bollywood. In all fairness, both the newcomers show immense potential as actors. Raj Chaudhary is decent in his part of a Rajasthani Prince. The veteran actor Om Puri, who is seen only in the film’s opening sequence, gradually disappears as the film progresses. He makes his ‘presence felt’ only through his voiceovers. The rest of the cast helps the film move forward.

The film’s music (Shankar-Ehsaan-Loy) seems forced into the film and is not at all impressive. Amongst the entire lot, the only tracks that stand out in the album are ‘Teen Gawah’ and the title song (whose repeated playing becomes irritating eventually). Besides the film’s background score being average, it also (many times) gets overlapped by the film’s songs.

The film’s editing (P.S. Bharathi) is average. The film boasts of excellent cinematography (Paweł Dyllus). It’s his magical work that makes the film nothing short of a visual delight. He has very enchantingly captured the folklore of Mirza and Sahibaan. Paweł Dyllus needs to be appreciated and lauded for presenting the film so beautifully. While the film’s VFX seem tacky and could have been better, the action scenes (Australian action director Danny Baldwin) are impressive.

On the whole, MIRZYA boasts of stunning visuals and good performances by the lead cast. However, it is marred by the treatment which is just not commercial in nature. At the Box-Office, the movie will struggle and will appeal only to a niche set of multiplex going audiences.
– See more at: http://www.bollywoodhungama.com/movie/mirzya/critic-review/#sthash.1j8UfMWm.dpuf