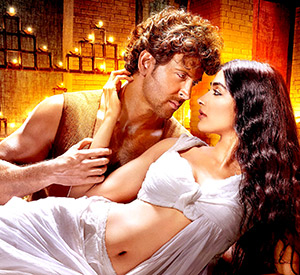 In the recent times, filmmaker Ashutosh Gowariker has become synonymous with historic films and the surreal sets mounted on the larger than life canvas. Films like JODHAA AKBAR, SWADES, and LAGAAN stand as testimony to the same. This week’s release is MOHENJO DARO, yet another period film from the stable of Ashutosh Gowariker. Will MOHENJO DARO have a ‘historic’ run at the Box-Office or will it bite the dust, let’s analyse.

The film starts off with the era of 2016 BC in the North West region, which happens to be the prehistoric India. This gradually leads to the introduction of Sarman (Hrithik Roshan) and his victorious fight with a predator crocodile. While on one hand the villagers felicitate him for the victory, on the other hand, Sarman is adamant to visit the city of Mohenjo Daro, something that his uncle and aunt are not too keen on, for reasons best known (only) to them. One day, after much reluctance, Sarman’s uncle and aunt give in to his demands of visiting Mohenjo Daro, but, not without handing him over a ‘identity coin’. When Sarman reaches Mohenjo Daro, amongst the many other things, he sees the beautiful ‘Sindhu Putri’ Chaani (Pooja Hegde), the daughter of a religious pandit (Manish Choudhary). Both, for Sarman and Chaani, it turns out to be unspoken love at first sight. One day, the curious Sarman happens to visit the ‘upper city’ in search of Chaani. It is here, that Sarman, besides being stunned by the visuals and locations, witnesses the disparity that prevails under the rule of the evil ruler Maham (Kabir Bedi), who had once been earlier exiled from Harappa. In no time, Sarman becomes the people’s representative and raises his voice against Maham’s atrocities. Amidst all this, the pandit reveals a secret to Sarman that not just shocks Sarman, but also, sweeps him off his feet. What is the much guarded secret that Sarman gets to know, what is his connection with the city of Mohenjo Daro, and does the blooming love between Sarman and Chaani culminate into their unison… is what forms the rest of the story.

Despite the humongous canvas of the film, the film’s story and screenplay (Ashutosh Gowariker) turns out to be a major letdown, thus disappointing the viewers to the core. One does agree on the fact that researching about an era (read ‘civilization’) that is as old as a whopping 5000 years is a task in itself. At the same time, while writing the screenplay of such a film, one has to ensure that the audiences and their sensibilities cannot be taken for granted. The sad part is that Ashutosh Gowariker fails on this front.

Ashutosh Gowariker, who has always emerged a winner with his previous attempts at historic and period films, fails miserably with MOHENJO DARO as a director. It just won’t be wrong to say that in the name of ‘cinematic liberties’, Ashutosh Gowariker has taken the audiences sense and patience for granted. While the film’s first half is slow, the film’s extremely dragged second half acts more villainous. The film’s second half totally takes the steam off the film. The film’s climax only makes things worse. Ashutosh Gowariker, despite his goliath attempt in fictionally (re)creating the Mohenjo Daro civilisation, fails to convince the viewers about the same. What one fails to understand is how can someone like Ashutosh Gowariker, who is known for making some of brilliant films, can go so wrong with MOHENJO DARO.

As for the performances, the film clearly and rightfully belongs to the extremely versatile Hrithik Roshan, who has by now become the ‘go-to-man’ for such roles. With his Greek God looks and physical stature, Hrithik Roshan ensures and justifies his role of the unassuming farmer- turned-saviour. Hrithik Roshan walks that extra mile in terms of his spellbinding performance and muscle flexing action. He stands tall in every frame and delivers a towering performance. However, that by itself is unable to salvage a vacuous drama. In other words, despite the whole film riding (solely) on his shoulders, the film’s extremely poor screenplay gives in. The film’s heroine Pooja Hegde, after having done films down South, makes her debut with MOHENJO DARO. Despite her past experience, she’s average in the film. The veteran actor Kabir Bedi, excels in the role of ‘Maham’. What works to his advantage are his good looks and his baritone voice, both of which have been utilised beautifully by Ashutosh Gowariker. The other actors Arunoday Singh, Suhasini Mulay, Nitish Bharadwaj lend their able support in carrying the film forward.

While we would like to make a special mention to the film’s costumes (Neeta Lulla), the film’s VFX oscillates between amateurish and average. The film’s music (A R Rahman) is nothing extraordinary, as one would have generally expected from the music maestro. The film’s background score is decent, but, a bit loud in many places.

The film’s cinematography (C.K. Muraleedharan) is above average. The film’s editing (Sandeep Francis) lands up being one of the film’s shortcomings.

On the whole, MOHENJO DARO comes across as a grand historical fictional tale which appeals only in parts. The lack of engaging and relatable drama act as spoilsport in the narrative. From the Box Office perspective, competition from RUSTOM and lack of crucial narrative will act as a major hindrance.