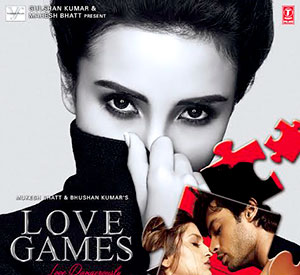 The story starts with the sexy Ramona Raichand (Patralekha) losing her husband in an accident. However, she is a sex addict and decides to find solace in the arms of her f*ck buddy Sameer Saxena aka Sam (Gaurav Arora). Sam, on the other hand, is a lonely, rich and spoilt son of a wealthy business tycoon. While sex, drugs and self-harm is his way of living, Sam, who consults a psychologist for his depressive state owing to a dark past, tries to find adventure in his life. Hence, he decides to accompany his sex buddy Ramona in ‘love games’. This game of infidelity is all about seducing happy couples and getting laid with them. Sam has to score the wife, while Ramona has to go for the husband and whoever gets laid first wins. And the loser will supply a week of cocaine to the winner! Amidst this game, things get serious when Sam falls in love with Alisha Asthana (Tara Alisha Berry), a doctor by profession but married to an abusive criminal lawyer Gaurav Asthana (Hiten Tejwani). Sam’s love for Alisha threatens his ‘friends with benefits’ sort of relation with Ramona and she starts losing her partner and in turn also her ambitions. How far will Ramona go to fulfill her desires and her dreams and how will Sam stop himself from becoming a pawn in Ramona’s next love game is what forms the rest of the story.

While Vikram Bhatt has given us some fine films, we cannot expect anything less from this filmmaker when it comes to this genre of erotica. He masters it and Love Games reinstates the same. The film has ample love making scenes shot aesthetically. The plot, like other Bhatt films, explores the deep, dark and dangerous sides of humans with several twists and turns and handling them comes naturally to the director. A special mention to a scene shot at the hospital, wherein Alisha rushes to attend a serious patient. While the actors in the scene play their parts with conviction, the scene also portrays how a hospital handles the chaos with authenticity. Though the story moves with a good flow overall, there are several dips in the plotline. In fact, certain portions look a tad bit stretched, especially in the second half.

It should have been a Ramona film all the way. Considering the way this good girl gone bad character should wow the audience, the Citylights girl Patralekha fails to match up to the pedestal of this Priyanka Chopra-meets-Rosamund Pike (from Gone Girl) sort of character. May be it is her debut film’s demure girl image or may be it wasn’t the character for her, but Patralekha’s act as Ramona could be termed as a ‘casting woe’. On the other hand, Gaurav Arora does a decent job of playing the depressed and helpless character of Sam Saxena, who resists to abide by Ramona’s mean and cruel ways. Tara Alisha Berry, however, has surprised her with her good performance as a doctor. While she debuted in Mastram, this actress has come a long way we believe. Her confidence as a doctor is impressive. Blue eyed boy of television Hiten Tejwani, who charmed the audiences with his perfect son avatar in serials, has by far given us one of his most disappointing performances. Other characters help in taking the movie forward.

What plays a great part in sort of setting the tone of the film is the music. The romantic number ‘Mohabbat’ and ‘Awargi’ are soothing, while ‘Aye Dil’ is hummable and catchy. The cinematography by Manoj Soni is good but the editing by Kuldeep Madan is little haphazard. However, what is worth mentionable is also the fact that the film delivers what it promises – 114 minutes filled with entertainment and bold content. Unlike films that showcase toned down content as compared to its trailers, it can be fairly said that the content in Love Games hasn’t been compromised. From bold liplocks to words like ‘f*ck’, ‘sex’ haven’t been beeped or censored in any way.

Overall, Love Games is a game you would like to be involved in as it is a treat for erotica lovers. The lethal combination of sexual content and aggressive promotions will ensure a safe ride for the film.