The Flying Jatt on The Voice India Kids 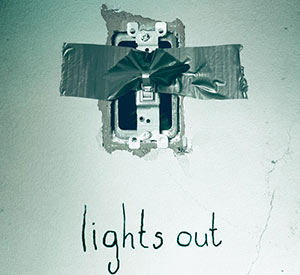 Over the years, there has been a small yet steady and visible growth in the number of horror films hitting screens. In fact the genre of horror movies has fast developed an ardent following among the discerning viewers. Now in a long list of horror films, we see the release of yet another one in the form of LIGHTS OUT. But in an age when films like THE CONJURING have captured the audience’s imagination indulging into their deepest fears, will a film like LIGHTS OUT work is the question.

Based on a short film by the same name that released in 2014, LIGHTS OUT is the story of Rebecca (Teresa Palmer) whose little bother Martin (Gabriel Bateman) experiences the same events that once tested her sanity. Rebecca works to unlock the truth behind the terror, which brings her face to face with an entity that has an attachment to their mother Sophie (Maria Bello). The short film that was adjudged as the winner of a short horror film contest was picked by James Wan to be developed into a full length feature directed by David F. Sandberg. Like the short film, the plot deals with a novel concept of a ghost that can be seen and is active only in the dark.

The film starts off with Rebecca leading an idyllic life that is abruptly interrupted with a call from her step brother’s school informing her that Martin had fallen asleep for the third time in a week at school. When Rebecca arrives at the school she is met by a representative from the Child Protection Services who questions her about her mother’s mental stability and her own ability to be a responsible guardian for Martin. After leaving the school with Martin, Rebecca heads back to her mother’s house only to learn that her childhood tormentor, a ghost named Diana is back and this time is after Martin. Though Rebecca decides on taking Martin with her, the CPS forces her to let Martin live with their mother and unknowingly Diana as well. In the interim, Diana who once was an inmate with Sophia at a mental institution suffered from a rare skin disease that made her skin hyper sensitive to light. Wanting her friend Sophia back, Diana goes on a rampage to ensure that Sophia continues to suffer from depression and remains her friend. Will Rebecca and Martin escape from Diana’s claws and will the brother and sister manage to save their mother from depression is what forms the rest of the film.

Unfortunately like most horror stories, LIGHTS OUT too follows the tread bare path to scare the audience, with emerging ghouls from around the corner, that indescribable element in the corner of our eye and a mentally unstable family member… this film covers it all. Though the concept may be a novel one, the overall execution of the film leaves a lot to be desired. Replete with horror clichés, the film does manage to scare in parts, however the overall menace that should permeate across the film is evident only in a few areas. Yes dealing with a ghost that has to play within set parameters (only in the dark) do pose its own set of problems, the viewer does feel at times it could have been better. Director David F. Sandberg does a good job bringing out the scares ever now and then, but somehow his short film seemed to stand out more than this full length feature. As for the visual effects in the film, though limited in a film like LIGHTS OUT where the ghost is usually seen as just a silhouette, they are very well done.

Coming to the performances in the film, Maria Bello as Sophie, the mother on edge suffering from acute depression while trying her level best to put up a brave front and hold things together is spot on with her portrayal. Teresa Palmer as Rebecca does a good job in her role as the older sister trying to protect her brother and save her mother at the same time. However, the scene stealer is Gabriel Bateman as Martin who does a commendable job as the scared kid whose nights have been haunted by his mother’s ethereal friend. In fact it is thanks to fear that Bateman manages to convey that the audience actually develop a rapport with the family members. But on the other hand Alexander DiPersia as Bret, Rebecca’s boyfriend seems totally lost, and ends up being just an extra on hand when help is needed.

On the whole, with good editing, and trademark James Wan techniques of building up anxiety and good usage of light, the film definitely does manage to raise the hair on your neck when needed. Entertaining, scary in parts and funny at times, LIGHTS OUT makes for a decent one time watch.