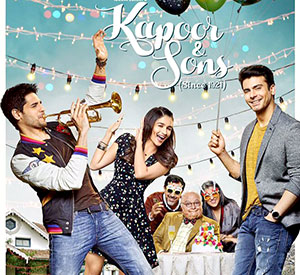 Every Friday, Bollywood witnesses a new film with varied genre. This week’s release KAPOOR & SONS is a family drama about a dysfunctional family of three generations. Will KAPOOR & SONS witness a ‘SON-rise’ at the Box-Office, or will it spell doom for the makers, let’s analyze.

KAPOOR & SONS starts off with the 90 year old Dadu (Rishi Kapoor) ‘practicing’ death sequence at the dinner table. This is followed by a day in the life of the Kapoor family that consists of Harsh (Rajat Kapoor) and his wife Sarita (Ratna Pathak Shah) along with Dadu. The scene then shifts to the introduction of Harsh’s elder son Rahul Kapoor (Fawad Khan), who happens to be a hugely successful writer living in London and Harsh’s younger son Arjun Kapoor (Sidharth Malhotra), living in New Jersey, who happens to be a college dropout -turned-bartender, now ‘trying’ to be a writer. Right from the word go, he feels being treated as the black sheep of the family, because of which, he feels that his parents had always seen their ‘perfect son’ in Rahul and that they love him more than him. This is what creates a rift between the two brothers. One day, when both of them get a phone call informing them about the hospitalization of Dadu, they both rush to India (Coonoor to be specific). Despite their differences, they try to be good to each other for the sake of their family. One day, after an extremely tensed up argument, when Arjun attends a party to chill out, he accidentally meets the ‘chull-buli’ Tia Malik (Alia Bhatt), who is always full of life. Their friendship gradually blossoms into love. On the other hand, at the behest of an estate agent, Rahul (who is unaware of Arjun’s feelings for Tia) also meets up with Tia in order to buy her ancestral estate for his company. Tia gets infatuated by Rahul on a drunken night. Amidst all this, Dadu confesses about his last two wishes before he dies. While the first one is to be buried and not burnt after his death, the second wish is to have a happy family photograph, comprising of all the members. On the ‘D-Day’ of the family photograph, the can of worms is opened which leads to flaring of tempers, ego clashes and the family photo is session doesn’t happen. Post that, the family becomes furthermore distorted and disjointed.

What are these startling revelations that breaks the Kapoor household, does Dadu’s last wish of having a joint family photograph get fulfilled, whom does ultimately Tia settle for: Arjun or Rahul is what forms the rest of the film.

KAPOOR & SONS happens to be director Shakun Batra’s second film as a director, (the first film being EK MAIN AUR EKK TU). With KAPOOR & SONS, Shakun Batra has taken a gigantic leap as a director. He delivers a film that doesn’t look like fictional movie, but a true life tale of every family. Barring a few scenes (in the second half), Shakun delivers one of the finest products in the form of KAPOOR & SONS, a new-age film that can easily be termed as one of the finest films of the year. His direction is such that it feels like the camera is just following the characters while they go about with their lives. While the film’s first half sets the tempo and the mood, it’s the second half that acts as a huge ‘revelation’ in the true sense of the word. One has to give it to Shakun for being successful in dodging the ‘suspense’ till the end. A very proud and a well deserving pat on the back to the film’s writer Ayesha Dhillon and also Shakun Batra for ‘gifting’ a film that the audiences will never forget. The film’s screenplay is brilliant. This duo should be applauded for the way they have sketched every single character and their respective quirks. The humor is very well weaved in the film.

Some of the most remarkable scenes of the film include Alia Bhatt’s emotional break down when she talks about her family, the confrontation scenes during the film’s climax and Fawad Khan’s moments with Ratna Pathak Shah. The director needs to be awarded brownie points for the finesse with which he has shot these scenes and the flawless narrative that binds the film without any loose ends.

As far as performances are concerned, the film totally belongs to Fawad Khan, Ratna Pathak Shah and Rajat Kapoor. It’s extremely endearing to see Rishi Kapoor playing a 90 year old man with the heavy make up. Its something that has never been done before in Bollywood. One has to watch his trysts with his ‘I-papad’ to know what we are saying. Rishi also brings maximum humor with his cute act as the loveable grandpa. Fawad Khan, on the other hand, surprises everyone with his exceptionally sensitive performance that can be rightly termed as a ‘straight-from-the-heart’ act. The emotional bond that his character develops with the audiences is so strong that almost everyone will want to have a son and a brother like him. The sensitivity, with which he has handled his character and the film, is really something that needs to be seen. The term that best describes Rajat Kapoor and Ratna Pathak Shah’s performances in the film is ‘outstanding’. They two talented actors get to show their full potential in the film. Sidharth Malhotra is decent in his role of the black sheep of the family and the way with which he has held burden of his character is really good. Alia Bhatt, on the other hand, has comparatively less screen space. But she simply owns the scenes she is in. Her onscreen chemistry with Sidharth Malhotra is sweet.

The film’s music (Amaal Mallik, Badshah, Arko) is a letdown and has nothing to boast about except for the chartbuster ‘Chul’ track. There could be been better tracks to complement the film. On the other hand, the film’s background score really scores with the film and its narrative.

The film’s cinematographer (Jeffery F. Bierman) has done an excellent job in capturing the serenity of Coonoor like never before. His camerawork is such that it never seems to interrupt the actors in their performances. The film’s editing (Shivkumar V. Panicker) is excellent.

On the whole, KAPOOR & SONS makes for an excellent movie that you must watch with your entire family. This film is Beautiful kar gayi Chul!