A surprise visit at the opening episode of Jhalak Dikhlaa Jaa 9! 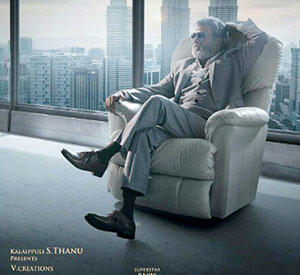 There is one sun, there is one moon and there is only one Rajnikanth. This one sentence sums up the ‘Rajini mania’ that’s prevalent all over the world. With two of his last films (LINGAA and KOCHADAIIYAAN) not faring well at the box-office, all the eyes are indeed set on this week’s release KABALI, that stars everyone’s favourite ‘thalaiva’ Rajinikanth. Will KABALI be able to set the box-office on fire or will it backfire like its ‘predecessors’, let’s analyze.

KABALI starts off in the scenic location of Malaysia, where everyone’s favourite don Kabaleeswaram aka Kabali (Rajnikanth) is released from jail. Kabali was grievously wronged years ago and had to spend his jail term for the murder that he did not commit. The very moment he comes out of jail, he realises that the world has become a different place to live in. During his tenure in the jail, there arose a notorious gang named ’43’, which left no illegal activities untouched. When Kabali gets to know about this gang, he ‘self-initiates’ a meeting with the gang’s top-notch members, so that they can forward the message of his release to their boss, who happens to be the extremely dreadful Tony Lee Yang (Winston Chao). While Kabali gets a heroic welcome from everyone after his release, he also gets invited to be a part of many social causes. One such social cause happens to be his very own ‘FLF’ (Free Life Foundation), where the ‘upcoming notorious’ youngsters are reformed. During the ‘graduation ceremony’ of their latest batch, the students get into a question-answer session with Kabali. It’s during this session; Kabali tells the reason behind him becoming a gangster and also recounts all the incidents that connect his dreaded past to his peaceful present. When he plans to start the ‘second innings’ of his life, he gets the shocking news about his wife Roopa (Radhika Apte) being still alive. This shocks him tremendously because he had spent the whole 25 years in jail thinking that Roopa was dead, after she was killed by the villains. If that wasn’t enough, Kabali also gets to know that he has a daughter named Yogi (Dhansika) who has been working as a contract killer. But, what Kabali does not know is the fact that his own daughter had been given the task of bumping him off by the villains. Will Kabali’s daughter kill her own father for the sake of money, does Kabali ever meet his dearest wife Roopa and does Kabali become successful in eliminating his rival gang ’43’ in the end… is what forms the rest of the story.

The film’s script (written by Pa. Ranjith) is something that may not be as tangible to a non-Rajinikanth fan. There are scenes in the film that may defy human imagination and logic, but, then, with Rajinikanth at the helm of things, logic and rationalism be damned! Having said that, the script also does not fully provide Rajinikanth’s onscreen antics, something that he is known for over the years.

The film’s director Pa. Ranjith (whose last film MADRAS was a blockbuster) needs to be applauded for having made a film that shows Rajinikanth playing his age. Even though Pa. Ranjith does not do anything way different from what we have seen before in the past Rajinikanth films, still he manages to keep the film engaging for the audience. The flip side is that, even though there are ‘Rajini-isms’ that the film boasts of and rests on, KABALI leaves a huge vacuum devoid of Rajinikanth’s histrionics, something that his hardcore masala fans will miss. Additionally, the film also starts lagging at many places (especially during the second half). Add to that is the film’s slow pace and irregular narration, which takes the steam out of the film. It will just not be wrong to say that it’s only the screen-presence and the inimitable charisma of Rajinikanth that rises up to save the film on many occasions.

As for the performances, it’s obvious that the film rides solely and exclusively on the shoulders of Rajinikanth, who pulls out all stops to ensure that the viewers are treated to a ‘paisa vasool’ performance. Offering him rock solid support is Radhika Apte (who predominantly features as a ‘pregnant lady’ in most of the flashback scenes). One cannot take away the fact that she does complete justice to her character in the film. Do not miss her emotional scene where she meets Rajinikanth after a long time. This scene is definitely bound to give you goose bumps. Winston Chao, on the other hand, is pretty average as the villain. His character neither gets translated into a dreaded villain, nor does his screen presence send chills down the spine, something that is hugely required from a villain in a Rajinikanth film. The rest of the characters (Dinesh Ravi, Kishore, Kalaiyarasan, John Vijay) do their bit to help the film move forward.

Barring the title track, the film’s music (Santhosh Narayanan) is a just above average fare. The film’s background score is decent and moves along with the pace of the film. The film’s cinematography (G. Murali) is decent. The film’s editing (Praveen K.L) is pretty average.

On the whole, KABALI is an archetypal Rajinikanth film that will surely be lapped up by his hardcore fans. Rajinikanth does his best to carry the film on his able shoulders but the audiences will be left wanting for more.