Nikhil Sinha is a passionate director and producer- Karthik Jayaram! 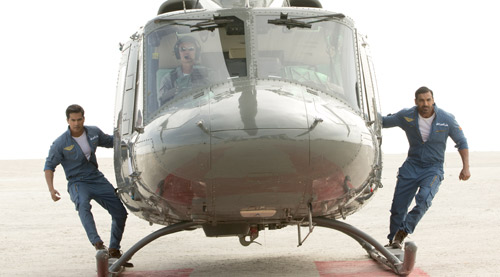 John Abraham, Varun Dhawan and Jacqueline Fernandez have been going that extra mile to promote their upcoming film Dishoom. From making appearances on TV shows to jetting across the country, they have left no stone unturned. Now we hear that John Abraham and Varun Dhawan will be performing a live stunt from the film as part of a promotional activity for the film.

Apparently, this one-of-its-kind event will see the actors recreating the film’s expensive chase sequence live on a helicopter. In fact the duo will travel from New Delhi to Noida on a chopper exactly like they do in the film, and will land and make a heroic entry at a cricket ground in Noida. With both the actors risking literally everything in this promotional stunt, the film’s producer Sajid Nadiadwala has ensured that all safety measures required for the stunt are in place well before the stunt happens. As for Varun and John’s co-star Jacqueline Fernandez, though the actress will not be part of the stunt she will be there with the team to promote the film and interact with the audience during the tour.

As for the film itself, Dishoom is directed by Rohit Dhawan and will feature Akshaye Khanna making a comeback of sorts. The film is slated to release on July 29.