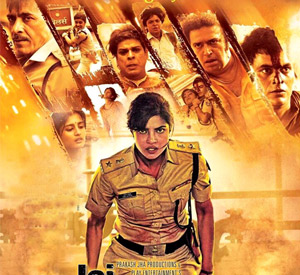 The year 2001 saw the ‘advent’ of an extremely hardline film titled GANGAAJAL that starred Ajay Devgn, Gracy Singh and Mukesh Tiwari in pivotal roles. The film went onto become a blockbuster at the box-office. Today sees the release of JAI GANGAAJAL, that’s set in the similar (if not same) premise. What one needs to understand is that JAI GANGAAJAL is not a sequel as it does not start from the point where the previous one ended. JAI GANGAAJAL is a story of the police-society relationship being revisited. It is the story of a cop with a conscience from today’s day and age. While GANGAAJAL saw Ajay Devgn as the righteously tough cop, JAI GANGAAJAL sees the dawn of Priyanka Chopra as an IPS officer. Will JAI GANGAAJAL do complete justice to the legacy of GANGAAJAL or will it turn out to be an ‘impurity’ at the Box-Office, let’s analyze.

The film starts off with the respective introductions of the corrupt cop Bhola Nath Singh aka B. N. Singh (Prakash Jha), Babloo Pandey aka ‘vidhaayak’ (Manav Kaul), Dablu Pandey aka ‘chhote vidhaayak’ (Ninad Kamat), the effeminate Munna Mardani (Murli Sharma), the IIT topper cum PhD from MIT Pawan (Rahul Bhat) and the fearlessly dutiful IPS officer Abha Mathur (Priyanka Chopra), who gets transferred to the Bankipur zilla. Ever since the time she steps into the town, Abha witnesses many unlawful things like corruption, the ‘selling off’ of the Khaki uniform to the lawbreakers, merciless rapes and also the farmers’ suicides due to the non-payment of the loans taken. One fine day, when a thermal power corporation sets its eyes on the town, they offer double the cost of the land to all the residents in exchange for vacating their lands. While everyone abides by vacating their land (mostly) due to the fear of chhote vidhaayak Dablu Pandey or due to the lure of money, there is one fearless lady who refuses to part away with her land. Despite repeated requests and threats (in that order), when she refuses to give in to the demands of Dablu Pandey, her farmer father gets jailed in lieu of the nonpayment of loan. As the pressure starts mounting on her family, her old father surrenders to the situation by hanging himself to death. Despite her father’s death, the gutsy lady still holds on to her guns and refuses to part away with her land for the thermal plant. That’s when she gets picked up by the henchmen of Dablu Pandey, who, then take her to an isolated place and eventually Dablu rapes and kills her. Her kid brother Nagesh is the only one left behind. When Nagesh gets an opportunity, he picks up his school belt and strangulates Dablu Pandey in front of the whole town, which infuriates Babloo Pandey to the core and he vows to finish Nagesh by hook or crook. Amidst all this, the corrupt cop B. N. Singh develops a change of heart and keeps Nagesh under his protection.

Will Abha Mathur be able to eradicate corruption and other crimes from the town, is the corrupt cop B. N. Singh’s change of heart for real or is it a mere hogwash and does Babloo Pandey become successful in killing Nagesh in order to avenge his brother’s killingâ�¦ is what forms the rest of the story.

Over the years, we have seen the story of an honest cop in many movies. Testimonies to this are in the form of Govind Nihalani’s ARDH SATYA, E. Niwas’ SHOOL and of course Prakash Jha’s GANGAAJAL. Prakash Jha, whose forte has always been the hard hitting stories of the northern India with the undercurrents of heavy political upheaval, springs into action yet again with the screenplay of JAI GANGAAJAL. Despite having politics and nexus as the mainstay, he has tried his level best to keep the film’s narrative as lucid (if not simple) as possible. The movie is set in heartland of India. Since we have seen similar films before (corrupt politicians versus cops), there is no novelty factor. However, Prakash Jha’s screenplay is engaging. Even though the length of movie acts as deterrent in the film’s progress, the positive side of the film is that it has good brand value. One has to give it to Prakash Jha’s direction for having churned out some of the most memorable scenes in the film. Like the market scene where Priyanka Chopra bashes a goon in her introductory sequence, the confrontation scenes, Ninad Kamath’s hanging scene, Manav Kaul mercilessly beating Prakash Jha.

When it comes to directing of films belonging to the ‘political thriller’ genre, Prakash Jha has been very good at it. JAI GANGAAJAL only acts as yet another testimony to the same. While the story establishes itself in the engaging first half, the second half revolves around the confrontation between Priyanka Chopra and corrupt villains. In the second half, the camera is not on Priyanka Chopra, but on Prakash Jha, which totally takes focus away from the central character. Despite all the odds, Prakash Jha manages somehow to keep the viewers on the hooks with his engaging narrative.

As for the performances, it is undoubtedly Priyanka Chopra who steals the show. Be it her perfect and impeccable timing, her intimidating screen persona and presence, she delivers a superlative performance, even though it may not qualify to be her career-best. She stands tall and gets her role spot on. As far as Prakash Jha the ‘actor’ is concerned, he pushes himself a bit too hard to get the nuances and the finer points of his character. And that very clearly shows on screen. But, that does not take away the fact that he delivers a remarkably good performance. He comes across as an excellent actor with a meaty role. Manav Kaul as Babloo Pandey is in top form. Right from his dialect to the body language of his character, Manav Kaul makes no mistakes in getting into the ‘skin of his character’. Murali Sharma in a drag avatar seems a bit hard to digest initially, but his character gets embroiled into the script so much that you land up overcoming your inhibitions about his character. While Rahul Bhatt is completely wasted (read grossly ‘mis-utilised’), Ninad Kamath, on the other hand, delivers a decent performance (ignoring a few places where he tends to go overboard).

Even though the film’s music (Salim Merchant, Suleiman Merchant) has nothing much to boast about, it’s the film’s background score that works with the narrative.

On the whole, with the absence of new releases in last two weeks, there seems to be no competition for JAI GANGAAJAL. Added to that a great brand value, all of which will ensure the movie to sail through at the box-office.