Gauahar Khan lashes out at the media! 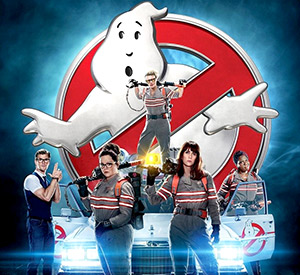 Ghosts, ghouls, paranormal activity and the unknown has always captured human fascination and fear, but at the same time has been the driving force behind the question of life after death. It has been this one question that has sent more than a fair share of people in pursuit of the ethereal, however, despite numerous eyewitnesses, grainy photographs and warbled tape recordings, a concrete physical proof of the ether realm has evaded us. This week, we see the release of a film that deals with the topic of ghosts, but unlike the typical horror outing, this one caters more to your funny side. Yes we are indeed talking about GHOSTBUSTERS. A reboot of the original film that released back in 1984, GHOSTBUSTERS promises a thrilling, chilling yet rib tickling ride. But will a reboot featuring an all new cast with cameos by original film’s actors work is the question.

GHOSTBUSTERS starts off following the story of Dr. Erin Gilbert (Kristen Wiig) who dreams of acquiring tenure status at the Columbia University. However, her dreams of tenure come under threat when she learns that her one time friend and co-author Dr. Abby Yates (Melissa McCarthy) released a book on paranormal that they wrote, without her permission. Fearing that the book which deals with the paranormal will affect her tenure application, Erin sets out to confront Yates and makes her withdraw the book. But when Abby and Erin come face to face, a series of confusing events and an abrupt introduction of Dr. Jillian Holtzmann (Kate McKinnon), lead Erin on a ghost hunting expedition with Abby and Jillian. The expedition proves to be a success with the trio being able to find an ectoplasmic human representation of a once living being, but unfortunately the said apparition escapes their clutches. However, a video of the encounter with Erin ranting about ghosts being real makes its way to the web, which not just ends Erin’s tenure but also gets her fired. In the meanwhile, MTA worker Patty Tolan (Leslie Jones) witnesses a ghost in the subway lines when she goes to investigate an apparent suicide victim who had ventured onto the tracks. Shaken by the apparition, Leslie contacts the trio of Erin, Abbey and Jillian, who in turn manage to test their new proton containment laser that Jillian built. Though sightings of ghosts steadily rise, the efforts of the group are constantly sidelined as being fake by the media. Despite these setbacks, the group continues to develop their ghost containment system and advertises themselves as Ghostbusters. They Ghostbusters also hire a dumb, blonde secretary Kevin (Chris Hemsworth) who has no idea of what his job profile is or what is that of his employers. Simultaneously, Rowan North (Neil Casey) an occultist who has been shunned for most of his life is using devices developed on the lines of Abbey and Erin’s book to summon the undead. Will Rowan who plans on leading the army of undead manage to overpower the Ghostbusters, will the people finally acknowledge the legitimacy of the Ghostbusters and will they actually manage to stop a cataclysmic event in the heart of the city is what makes up the rest of the film.

Coming to the film itself, first things first, the makers of GHOSTBUSTERS and the production house have attempted to reboot a film that has since achieved cult status among its fan following. Coupled with this is the fact that being a reboot of a comedy film, entails telling the same jokes to the audience a second time round and expecting a laugh riot. Despite obstacles like this, director Paul Feig decided to forge ahead and recast the original members, only this time as an all-female team. Though the thought is interesting and the lead female cast is very powerful, the slow pace of the film in the first half makes it difficult to enjoy the film as the director takes his own sweet time to come to the actual plot. The film could have been much better had the script packed a punch in it but it sadly takes out the thrills and the scary chills from the original and replaces it with smoother more eye appealing CGI that does little to instill any sort of fear. Besides this, there are plenty of plot holes that keep cropping up, like for instance, the team of Ghostbusters is unable to rent an old fire station to be their headquarters but are able to find the money to procure and develop nuclear devices that can trap ectoplasmic representations. If that wasn’t all, at one point in the film, the team is unable to do much but just trap and confine a ghost, however later on with the help of more or less the same gadgetry they are able to render ghost incapacitated. Another sore point in the film are the continuity errors, though minute are still pretty noticeable.

As for the performances, Melissa McCarthy and Kristen Wiig as Drs. Abbey Yates and Erin Gilbert respectively apparently are one time best of friends who drift apart as differences between them on a coauthored book grow. However despite, the two settling their differences they simply do not come across as friends, at best their attempts to hash off depending on the others actions makes for a comic watch. McCarthy’s dialogues seem to be monotonous and flat, the only high notes hit are when she is possessed and/ or shouting. The delivery of the jokes lacks punch, with the whole essence going amiss due to a misplaced vocal annotation. Kate McKinnon as the eccentric Dr. Jillian Holtzmann is funny but confusing. There is just too much happening with her constantly while she tries her level best to be assimilated into the group. Though her over the top histrionics and complete disregard for personal safety is a bit concerning, it does bring the much required comic relief to the film. Leslie Jones as the stereotypical loudmouthed ‘Hell-Yeah’ street smart woman is funny but seems like a forced character into the team. Neil Casey as the underappreciated Rowan North does not come across as menacing at all instead his character comes across as being a marionette whose strings are pulled by an unseen hand. The star cast of the original 1984 film also makes special appearances in the film.

Being a film that deals with ghosts and ectoplasmic humanoid representations GHOSTBUSTERS obviously should boast of some pretty cutting edge visual effects. The CGI of the film is good and is synced well with the 3D effect. However, the makers have used the visual representation of the ghosts with respect to the CGI in the 1984 film. That being said, the heavy duty CGI and VFX in the climax is impressive.

On the whole, GHOSTBUSTERS is a simple horror-comedy which makes for a light entertainer which has its moments of fun. If you are a fan of the original, you might just enjoy this popcorn entertainer too.