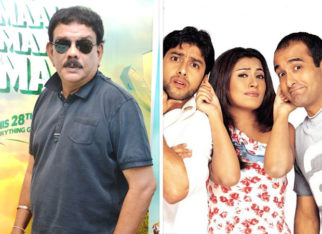 The super-prolific Priyadarshan, the master of mirthful comedies and father-figure to Anees Bazmee, Sajid Khan and others of the comedic ilk, is coming back to Hindi cinema after 2013 when he made the unsuccessful non-comedic Rangrezz. Says Priyan emotionally, “It’s been six years since I directed a Hindi film. Now I am back with a full-on comedy. But no vulgarity no double meanings. Hungama 2 will be as clean and family-oriented as all my comedies.”

#PriyadarshanEXCLUSIVE! Priyadarshan to make a comeback to Bollywood with HUNGAMA 2
But why Hungama after so many years? “I know Hungama came 16 years ago. But people have still not forgotten it. Besides, I share a wonderful rapport with the producers Venus Records & Tapes. I’ve made many wonderful films with them including Garam Masala and Hulchul. I like all of my films with Venus except Tezz which I personally think was a misfire.”

So is Hungama 2 going to be continuing the story from Hungama in 2003? “No. It will be a fresh story. We decided to title the new comedy Hungama 2 because the mood of masti, mischief and hungama remain unchanged.”

What also remains unchanged is some of the core cast of Hungama. “Paresh Rawal will be back in the film, so will Shakti Kapoor and Rajpal Yadav. Only the lead pair Akshaye Khanna and Rimi Sen will change. We will announce the new romantic lead of Hungama 2 very shortly.”

As for the plot, “It will be young, vibrant, warm, funny and family-oriented. In brief, a typical Priyadarshan comedy,” he promises.