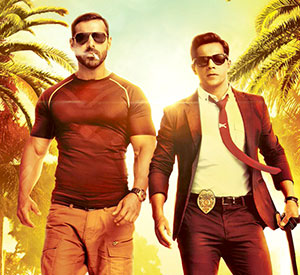 There have been many films in Bollywood that have been based on the game of cricket and match fixing. Films like JANNAT and the recently released AZHAR serve as testimony to the same. This week’s release DISHOOM is an action comedy which also deals with cricket in its plot. Will DISHOOM hit a sixer at the Box-Office is the question of the hour… let’s analyze.

DISHOOM starts off with a well-planned kidnapping of Indian cricket team’s ace cricketer Viraj Sharma (Saqib Salim) by the dreaded Altaf (Rahul Dev), at the behest of Wagah (Akshaye Khanna) during a cricket series in the Middle East. The reason for Wagah to kidnap Viraj Sharma is to bail himself out of the Rs. 400 crore worth of debts that he has got himself into because of his match fixing deals going south. When the Indian government gets to know that Viraj Sharma has been kidnapped and that too, just 36 hours before the crucial and the much awaited India-Pakistan match, they decide to put their best police officer Kabir Shergill (John Abraham) on the job. Fearing national unrest and tension, they instruct Kabir Shergill not to utter a word to anyone about Viraj Sharma’s kidnapping. When the news reaches the embassy of the Middle East, they immediately become ready to offer all kind of possible help to Kabir Shergill. That’s when Kabir Shergill chooses the ‘never-solved-any-case’ police officer Junaid (Varun Dhawan), who is only way too happy to be chosen for the task of finding Viraj Sharma. What happens after that are a series of twists and turns, oodles of roller coaster ride and adventure tales of Kabir and Junaid and their parter in crime Ishika (Jacqueline Fernandez) who is a petty thief. Will Kabir Shergill be able to trace out Viraj Sharma before the India-Pakistan match, what role does Junaid play in tracing of Viraj Sharma and whose side is Ishika on and will she be of any help towards solving the mystery behind the kidnapping of India’s key player is what forms the rest of the film.

First things first. DISHOOM’s script (Rohit Dhawan, Tushar Hiranandani) is predictable, however the chemistry between the actors, especially during the comic scenes make for an entertaining watch.

As for the film’s direction, Rohit Dhawan (whose last film was the John Abraham-Akshay Kumar starrer DESI BOYZ), has handled the entire proceedings of DISHOOM with extreme Ã©lan, style and panache. His efforts in mounting the film on such a large canvas pays off rich dividends. While Rohit Dhawan has ensured that the film’s first half is crispy and tight, it’s the film’s second half that starts lagging midway, which, then, gets overshadowed by the breath taking action sequences. With DISHOOM, Rohit Dhawan proves his ability to handle big scale and glossy production with utmost comfort and ease. Though the film takes many creative liberties and some moments in the film don’t seem justified, it doesn’t fail to entertain.

As for the performances, the film rides essentially on the shoulders of the two men, viz., John Abraham and Varun Dhawan. John Abraham handles his character of being a no-nonsense tough guy with perfection. He is surely one of the best action heroes in the business. On the other hand, with every passing film, Varun Dhawan is slowly inching towards being a ‘complete performer’. While Varun Dhawan exhibited his serious side in BADLAPUR, DISHOOM sees Varun Dhawan in a rather cute and comical avatar.

The ease with which Varun Dhawan executes the comic scenes is extremely adorable and praiseworthy. Overall, Varun Dhawan excels in playing his character in the film with utmost conviction and confidence. Jacqueline Fernandez brings in the glamour quotient to the film and acts her part very well. It won’t be wrong to say that DISHOOM sees Jacqueline Fernandez’s exceptional improvement as an actress. Amidst everyone, DISHOOM also sees the big return of the seasoned actor Akshaye Khanna, who announces his comeback in Bollywood with a bang with this film. His sense of timing and dialogue delivery adds more glitter to the character that he plays in the film.

Akshay Kumar, despite being cast in a cameo, is hilarious in his part of a gay bad boy. Saqib Salim is effective. The rest of the cast help the film in moving forward. The film also sees cameos by Nargis Fakhri, Parineeti Chopra and cricketers like Javed Miandad, Mohinder Amarnath and Atul Wasan.

The film’s music (Pritam) is peppy. Tracks like ‘Sau Tarah Ke’, ‘Toh Dishoom’ and ‘Jaaneman Aah’ are already blockbusters. The film’s background score (Abhijit Vaghani) is brilliant and moves in tandem with the film’s story and narrative.

The film has very impressive visuals and the person responsible for this is none other than the film’s cinematographer Ayananka Bose. Full points to him for making the film look extremely glossy and high on glamour. The film’s editing (Nitin Rokade, Ritesh Soni) is exceptionally crisp as the film’s runtime is around 2 hours. A special mention to the film’s stunt directors (Allan Amin, Stefan Richter) for shooting some breath taking action scenes in the film.

On the whole, DISHOOM has a predictable storyline. However, the engaging narrative, coupled with rich visuals and high octane action work in the favour of the film. Add to this the star power of John Abraham and Varun Dhawan which will definitely attract the youth. At the box office, the film faces no competion for next two weeks and hence it will ensure good returns to the makers.