The book of Fortune to bring some BAD news on MTV Splitsvilla 9! 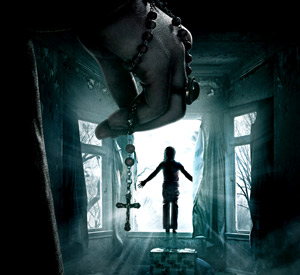 Back in 2013, we saw the release of the horror flick THE CONJURING. Now 3 years on, we finally see the sequel to what can easily be said was one of the best horror films of recent times. Titled THE CONJURING 2, the film once again promises to be a scare fest not meant for the weak hearted. But usually sequels do have a tough time living up to the originals, so the question of the hour is, will THE CONJURING 2 live up to expectations and hype or will it flounder.

The film stars off with the paranormal investigators Ed and Lorraine Warren investigating a gruesome murder in Amityville. While investigating the case under the pretence that the murderer was possessed by an evil spirit, Lorraine is led to the basement of the deserted house by the spirit of a young boy. There she discovers a frightening apparition that is clad like a catholic nun. Later despite returning home, Lorraine is haunted by constant dreams of the demon, while her husband Ed also experiences a series of nightmares. Unable to sleep, Ed decides on painting his tormentor on canvas to gain relief. However, to Lorraine’s dismay, Ed’s dreams have been plagued by the same demon. Simultaneously, while Ed and Lorraine are having problems of their own, across the seas in Enfield, England, a family of five, four kids and their mother, start experiencing disturbing paranormal activity in their house. At this point, the family is approached by Father Gordon who approaches Ed and Lorraine asking them to look into the happenings in Enfield, before the church involves itself in it. Following this, the couple sets off to England to help the single mother raising four children alone in a house plagued by malicious spirits. But will the ghostbusting couple emerge victorious or will the forces of evil prevail is what forms the rest of the film.

Right from the start, the viewer is taken on a thrilling ride that plays on visuals and background score that keeps you on the edge. Despite the paranormal investigators and their team not really being a danger, director James Wan does a brilliant job of eliciting fear in the minds of the viewers. In fact the film doesn’t waste a minute in bringing on the scare fest that lasts right through the film. Though unlike the first, THE CONJURING 2 features a few new twists in the plot, it still manages to retain its essence from the first. The first half of the film sets up the story of the Hodgson family sketching out each character as they get introduced, while simultaneously taking the story forward building up towards the climax. However, post the interval, the film’s pace does slow down a little. Here, the editor could have done a better job in cutting down unwanted / extended sequences that tend to become a drag. But, again Wan does a marvellous job with the visuals that might give the viewer a sense of deja vu, but still manages to send a chill through the spine.

Coming to the performances, Patrick Wilson as Ed Warren and Vera Farmiga as Lorraine Warren, the paranormal investigators, do a good job of portraying the pain and strain that investigating hauntings take on not just their souls but also on their human spirit. Madison Wolfe as Janet Hodgson is spot on with her portrayal of an 11 year old girl who is possessed; in fact she manages to bring out the pain and trauma that an individual goes through under such circumstances. However, Bonnie Aarons as the demonic nun takes the cake with her scary look that does not fail to chill you to the bone each time she appears on screen. Another aspect of the film that lends a supporting hand to the visuals is the background score of the film composed by Joseph Bishara that heightens the overall haunting effect of what is seen.

On the whole, THE CONJURING 2 is one of the best horror films to come out and a very worthy sequel to the first part. The film with its chills and thrills definitely makes it a worthy big screen experience. Must watch!