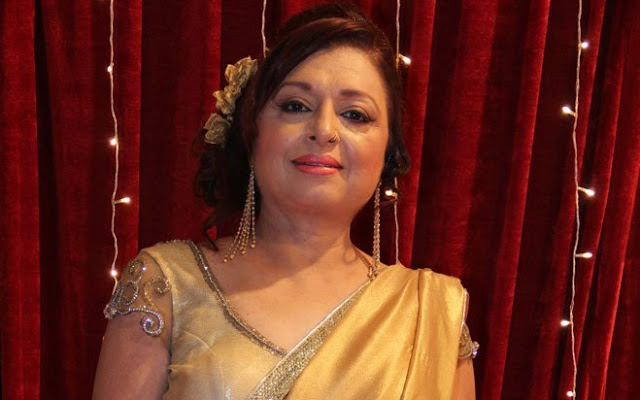 Only recently, I happened to learn that a family friend attended a clothing exhibition by veteran actress Anita Kanwal and couldn’t stop raving about the classy collection that the actress had put up.

I did my part of research as the actress had been missing from the television screen for a long time. I simply dialed her number only to have effervescent actress warm up and agree to share her experiences and on her turning into a designer.

Anita is a popular face with shows such as Chanakya, Shanti, and Sonpari. But she is best known for her negative role of Mrs. Seth, the mother who gets her own son killed, in the 1990’s Zee TV soap opera Banegi Apni Baat and has also been nominated in the category of the ‘Best Supporting Actress’

Read more to find out what drove the passionate and flourishing actress to keep acting in the backseat after working in the television for over 30 years now and how she pursued her alternate interest of designing and is in a happy space now.

But what made Anita take a backseat from acting? Why is she so miffed when production houses approach her that refrains to act? In a candid conversation with Anita, she spills some beans on the reasons why acting is not the right choice for a career…

Anita, you are a profound actress, what made you switch your career to being a Designer?

I love acting and I chose to be in this field because of my passion. But after spending decades in this industry, I realised that after each passing decade, the profession is getting demanding. There were times when even after informing 6 months prior that I would be going on leave, I was made to cancel the holiday.

The final nail in the coffin was when my mother was on the death bed and I was asked to finish my shoot. She wanted to say something, I was aware of that and hence I wanted to leave for the hospital soon, but it was only after the doctors declared her dead that I was allowed to rush! I am very sore after this incident and I do not think I would return to television till I recover from this tragic event.

What do you have to say about the way TV is progressing?

There is no humanity in this profession. Why do you think actors faint on the sets time and again. Why can’t they make a bank of episodes so that the production unit can work at a good pace? I completely blame the channels for this. Debating on whether we are going regressive, well ,I don’t know why are people in the race for TRP’s. I mean, why not uplift people by showcasing what is progressive than just present insane beliefs as people tend to follow it more.

Shows like Udann, Balika Vadhu, and the likes have done well. Along with that comes in a flow of superficial concepts! Day by day, we are promoting regressive beliefs as much as they accept it or not.

Anita, you seem to be miffed. TV is a complete no-no for you now?

I would not say I have quit TV. I am not being able to deal with the grief of not being able to hear the last words my mother wanted to say. I have acted in innumerable shows and if this is the price I have to pay for being an actor, I better do well in other creative fields. I am content as a designer and it at least gives me space where I can spend quality time with my loved ones and my own self.

Once off the screen, it is a little difficult for actors to make a come-back. Do you still get offers for television shows?

I get 2 to 3 calls every single day. Even if I take up a show, I will never be a part of shows promoting regressive beliefs. I have enacted roles which were fun to portray. In fact, when I was abroad, people told me how they loved watching ‘Sasural Genda Phool’ in Gabriel and Spain, but the channel axed the show there. I am sure the sensible audience is longing to watch shows in the likes of Banegi Apni Baat.

Absolutely. I finished my exhibition last week and currently on a holiday and never been this relaxed before.

It is really sad that such veteran actors had a bitter experience, nonetheless, India-Forums wishes Anita luck in her future endeavors and only hope she returns back to TV…