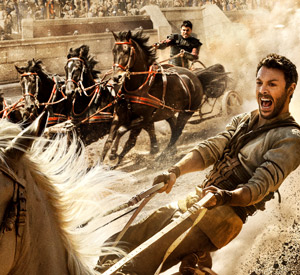 It is never easy to convert a novel into a full length feature film; leave alone if the book in question is over a 100 years old and has three films already made on it. However, the makers of the upcoming release BEN-HUR have attempted exactly that with their film. But will BEN-HUR manage to live up to expectations that have been set by not just the 1880 novel Ben-Hur: A Tale of the Christ by Lew Wallace but also those set by the previous film that was based on the book that released in 1959 is what we analyse.

The epic historical drama BEN-HUR starts off with a voiceover introduction being delivered by Morgan Freeman that details the setting from 33 BC. The film follows the life of Judah Ben-Hur (Jack Huston) a Jewish prince in Roman-occupied Jerusalem who is betrayed and falsely accused of treason by his adopted brother Messala (Toby Kebbell) and is sentenced to a life of slavery. Following the accusation Ben-Hur loses everything and spends five years in the galley of a Roman slave ship and later takes on the Roman Empire and avenges his adopted brother in a grand chariot race while finding redemption and being forever changed after a series of encounters with Jesus Christ.

Performance-wise, since the film relies heavily on Jack Huston as Judah and Toby Kebbell as Messala, it is just these two who make up for most of the screen time. Individually both Jack and Toby do a good job in their roles, but there is always a feeling of them being too overwhelmed by towering character sketches that they eventually fall a bit short of. But portraying the more sympathetic one time noble man who loses everything, hell bent on revenge only to find redemption, Jack fits in perfectly with the character. Similarly Toby as the ever chastised Roman orphan seeking validation and respect does equally well. In fact BEN-HUR hinges on the performance of these two actors who carry the film ably. Simultaneously, Morgan Freeman as Ilderim, who unlike the previous role, has a more grounded and serious character as compared to a comic one reprises his character with an air of authority. Here a special mention goes to writers Keith Clarke and John Ridley who have done well in developing the female character of Esther played by Nazanin Boniadi, especially since the new film gives her character a more independent and meatier role rather than just be another bystander in a war between brothers.

Consider the fact that BEN-HUR revolves around the years when Jesus Christ actively preached his message of love, compassion and forgiveness, director Timur Bekmambetov does well integrating the parallel plot between the background and foreground, the plot and subplot. Talking about Christ’s depiction in the film, Rodrigo Santoro as Jesus Christ does a more than convincing job.

Since the film is based on chariot racing, we do see a load of races, however, unlike the more modern sport of racing, be it cars or bikes, chariot racing was a more violent sport with riders either winning the race or ending it either dead or maimed. Here the CGI appears to be seamlessly merged with the live action visuals, however apart from this, there are a few other places where the visual effects could have been made in a more polished manner.

On the whole BEN-HUR that is set around the last days of Christ does have a lot of references to the Christian faith that could leave the audience who are uninformed about the faith, a bit lost. However, BEN-HUR despite its lengthy run time does make for a decent watch.