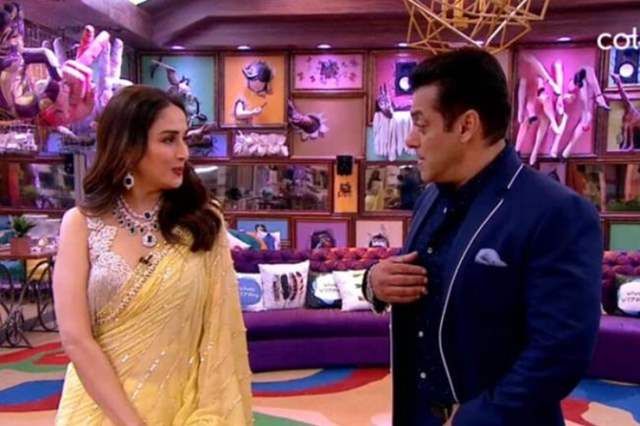 Bigg Boss 13 which is set to premiere tomorrow has been creating a lot of buzz for several reasons. From the launch of the show in Mumbai’s Metro to the participants’ list, this season has already started grabbing all the attention. And before the host, Salman Khan introduces the house to the contestants, he gave a tour of the controversial house to none other than Bollywood’s dancing diva Madhuri Dixit.

Colors unveiled a fresh promo of Salman and Madhuri taking a tour of the house. The house will be shown in the grand finale of Dance Deewane 2 which will air on Saturday night. In the fresh promo, Madhuri is wearing a yellow sari walking along with Salman, who can be seen showing her different places of the house in his fun style. The duo also recreated the iconic ‘Didi Tera Dewar’ moment from their blockbuster Hum Aapke Hain Kaun. Apart from this, they were also seen shaking legs on ‘Dekha Hai Pehli Baar’.

Have a look at their video here:

Also, we earlier reported about Devoleena’s entry in the show. The Saath Nibhana Saathiya will gift an idol of Lord Krishna to Salman Khan before stepping into the house. She’ll come dressed up as Gopi Bahu, the character she played on her show. Later, she’ll switch to sexy side in different attire and perform on a sexy number.

Meanwhile, celebrities including Rashmi Desai, Siddharth Shukla, Aarti Singh, Abbu Malik are the confirmed contestants who’ll be going inside the house this season.