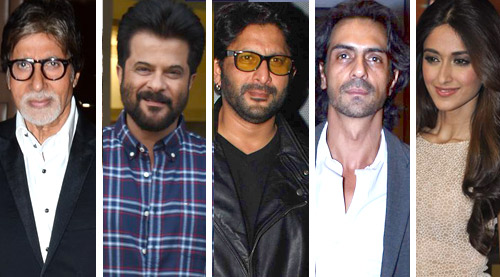 Earlier this week, we had reported that Anees Bazmee was ready for Aankhen 2 with Amitabh Bachchan but other cast members were yet to be locked on. Well, now we have the scoop on the cast and it is an interesting one.

Anil Kapoor, Arshad Warsi, Arjun Rampal and Ileana D’Cruz have been roped in for the film. A special event was organized on Wednesday at Filmcity to make the announcement where the cast of the film was revealed through a video package.

Anees Bazmee will don the director’s hat and Gaurang Doshi will be producer the film. Aankhen had Akshay Kumar and Paresh Rawal but due to their unavailability, they won’t be reprising their roles in the sequel.

Meanwhile, Amitabh Bachchan will be next seen in a social drama Pink whereas Arjun Rampal in Rock On 2. Anil Kapoor is currently busy with TV series 24. Ileana D’cruz was last seen in Rustom while Arshad Warsi was seen in The Legend of Michael Mishra.