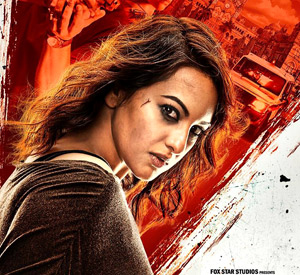 The year 1935 saw the release of a path breaking film in the form of HUNTERWALI that starred the ‘Fearless Nadia’. Over the years, Bollywood has given way to many ‘women-oriented’ films like MOTHER INDIA, BANDIT QUEEN, KAHAANI, QUEEN, MARDAANI and more. This week sees the release of yet another woman oriented film in the form of AKIRA starring Sonakshi Sinha. Will this film manage to kick some butt at the Box-Office or will it get itself kicked, let’s analyze.

Fox Star Studios’ AKIRA, which happens to be an official remake of the Tamil hit film MOUNA GURU, is essentially a story of a daredevil woman and her fight for survival amidst a bunch of brutal and corrupt cops who can plunge to any level in order to save their skin. The film begins with the ‘vocal introduction’ of Akira Sharma (Sonakshi Sinha), by Inspector Rabia (Konkona Sen Sharma). The story starts off with a 14 year flashback of Akira’s childhood in Jodhpur (Rajasthan). While returning from school, she witnesses an acid attack. This untoward incident encourages her mute and deaf father (Atul Kulkarni) to enrol her in martial arts classes. Angered by Akira turning a witness, when the culprits attack her, she accidentally throws acid on one of them, which results in her being jailed in juvenile home. As she grows up, at the insistence of her Mumbai based brother, Akira and her by-now widowed mother (Smita Jaykar) shift their base to Mumbai. It is in Mumbai, where life changes completely for Akira, who accidentally finds herself in a totally helpless situation for a ‘crime’ that she was not even a part of in the first place. What follows after that are a series of staged attacks, murders, physical and mental torture on Akira, all of which at the behest of the ‘drug sniffing’ cop ACP Rane (Anurag Kashyap) and his trusted fellow policemen. The degree of atrocities which get subjected on the innocent Akira reache to such an extent that she gets ‘officially certified’ as a mental patient and gets thrown away in a mental asylum. What was the reason for ACP Rane to be after Akira’s life, does Akira find a way out from the mental asylum and prove her innocence is what forms the rest of the story.

Although women oriented subjects are looked forward to in Bollywood, it really requires an outstanding script and a compelling screenplay in order to make a film of this genre to stand out. In case of AKIRA, despite the film having a strong message and an interesting concept, the loosely penned screenplay (Santha Kumar, A.R. Murugadoss) gives the film in. The script is totally disjointed, which acts as the villain in the entire film. Add to this, the fact that, the film has limited action scenes, no romance and no music lands the film catering to not a single vector of entertainment. The film simply fails to offer any kind of entertainment value to its audiences. The film’s dialogues (Karan Singh Rathore) are extremely average.

Even though director A.R. Murugadoss happens to be a big name down south with many hit films to his credit, AKIRA happens to be his third Hindi film (the first two being GHAJINI and HOLIDAY: A SOLDIER IS NEVER OFF DUTY). With his first two Bollywood films proving to be blockbusters, expectations were indeed sky high from him as a director as far as AKIRA is concerned. Despite the film taking off to a flying start in its convincing first half, A.R. Murugadoss starts struggling with the film at regular intervals, courtesy a weak screenplay. AKIRA’s second half tremendously slows down the proceedings of the film. As the film progresses, it (unintentionally) lands up becoming too dark in virtue, something that Anurag Kashyap’s films are generally synonymous with. While the film’s tagline screamed ‘No one will be forgiven’, one is bound to expect oodles of action galore and adrenaline rush. With the film offering none of the two, the audiences are bound to feel cheated by the time the films ends. There are way too many unexplained and unwanted scenes in the film that seem to be thrusted in the name of ‘cinematic liberties’. With the film’s climax turning out to be a total damp squib, it serves as a perfect example of bad execution of a good concept. Scenes like a mental patient driving a van without any mistake and the late police investigations are very shoddily explained.

As for the performances, the film rides majorly on the shoulders of Sonakshi Sinha and Anurag Kashyap. Even though Sonakshi Sinha comes across as a stark revelation in comparison to all her other films so far, the flip side is that, her action scenes are totally limited in the film. While one cannot deny the fact that AKIRA offered Sonakshi Sinha immense platform to exhibit her acting and action skills, the ludicrous screenplay failed to showcase the same. Unlike the film’s promos that showed Sonakshi Sinha doing some of the breath taking stunts, the film turns out to be sore disappointment because of her limited action scenes. On the other hand, there’s Anurag Kashyap, who means and spells menace with his performance in the film. Even though this is not his first film as an actor, his role of an unapologetic cop in AKIRA proves his mettle as an actor in all the films that he has acted in so far. Do not miss his introduction scene wherein he teaches his subordinates as to what ‘perfect timing’ is all about. There’s also Konkona Sen Sharma, who, for reasons best known to the director has been shown heavily pregnant throughout the film. Despite having limited screen time, she does not disappoint the audience. The rest of the actors do their bit in taking the film forward.

The film has no scope for music (Vishal-Shekhar), however the background score (John Stewart Eduri) helps the narrative. The film’s cinematography (R. D. Rajasekhar, ISC) is decent. The film’s editing (A. Sreekar Prasad) is absolutely average.

On the whole, AKIRA has an interesting concept which fails on the account of its slack screenplay and lack of entertainment value. At the Box-Office, it will be rejected and will entail losses to its investors.