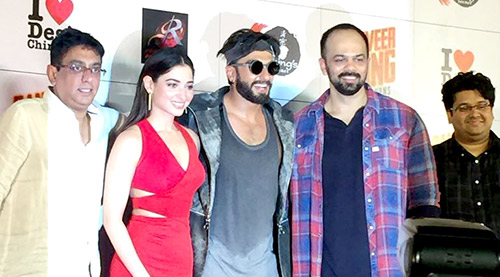 One of the most awaited advertisement of Ranveer Singh and Tamannaah Bhatia titled ‘Ranveer Ching Returns’ which is directed by Rohit Shetty on a grand scale was unveiled this afternoon. Inspired by the Hollywood film Mad Max: Fury Road the music video of Ching’s brand is a quirky one.

After unveiling the ad, Ranveer Singh, Tamannah Bhatia and Rohit Shetty interacted with media and gave some interesting scoops. When asked about whether they would like to work together in a film, Ranveer basically confirmed that he was indeed working with Rohit Shetty. He said that he loved working with Rohit on this ad and they will be working together in future as well. The actor informed that the film was still in its initial stage.

While we wait for this collaboration to happen soon, Ranveer Singh is gearing for his next release Befikre. Directed by Aditya Chopra, Befikre stars Vaani Kapoor and is slated to release on December 9, 2016.