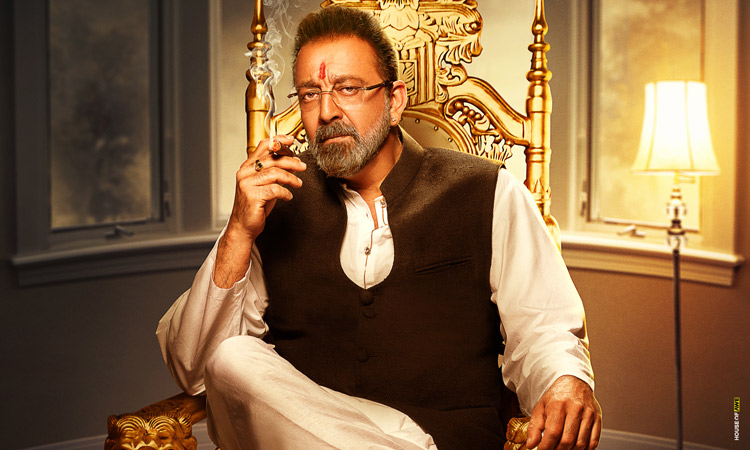 Political films, based in the hinterland, have a strong chance at the box office, especially when made in a massy way. Sanjay Dutt who has had a rough time at the box office ever since his new innings in Bollywood post his release from jail is now back with PRASSTHANAM, the Telugu remake of the 2010 film of the same name. The original was loved for its plot, concept and performances. So does the remake turn out to be the much-needed hit for Sanjay Dutt? Or does PRASSTHANAM fail to entice? Let’s analyse.

PRASSTHANAM is the story of family, trust and betrayal in a lawless land. 25 years ago, in Ballipar, Shiv (Anuup Sonii) has stood for elections against a violent rival. The rival stabs Shiv during a rally, resulting in his death. Shiv’s father is an ex politico who is distraught by the demise of his son. He tells his most trusted aide, Baldev Pratap Singh (Sanjay Dutt) to take over the reins and also to take care of Shiv’s wife Saroj (Manisha Koirala) and his two children. Baldev agrees but not before eliminating the rival candidate who killed Shiv. Baldev is helped here by his closest confidante, Baadshah (Jackie Shroff). Baldev marries Saroj and this angers Shiv’s daughter Palak. But Shiv’s son Ayush looks up to Baldev. Baldev and Saroj give birth to a son, Vivan due to which Palak further feels alienated. The story then moves 25 years forward in the present day. Baldev has been a four time MLA and is busy with the upcoming elections. He recently got a stay order on a land which is being illegally usurped by a cunning businessman, Bajwa Khatri (Chunky Panday). Palak (Chahatt Khanna) is now a doctor and is happily married and also has two kids. She has completely broken contact with Saroj and Baldev and she only is in touch with Ayush (Ali Fazal). Ayush still has the respect for his step father and dutifully works under him. Baldev is so happy with Ayush that he’s made it clear that he will be his heir. Vivan (Satyajeet Dubey) is infuriated with this bond as he feels he’s the biological son of Baldev and hence he is the rightful heir. Baldev however realises that Vivan is not cut for politics and advises him to study abroad and then handle his hospitality business. Vivan revolts and due to his hot headed nature, ends up insulting Asma (Divinaa Thackur), Baadshah’s daughter who’s also the manager in Baldev’s hotel. Baldev is aghast with Vivan’s behaviour and tells Ayush to apologise to Asma which he does. He also tells Ayush to train under Asma and he agrees. While working together, both get close. One day, Baldev is shot by assailants belonging to Bajwa who wants to avenge the loss of his land. Baldev survives and gets second thoughts about fighting elections. But Ayush takes care of everything and ensures that Baldev signs the nomination papers. Baldev gets whole hearted support from locals and hence, the party assures that he’ll become the state home minister after winning the elections and that Ayush will be youth president. Vivan revolts but Baldev shuts him up. Vivan ends up drinking and creating a scene in the hotel. Asma tries to control the situation but he ends up drugging and raping her. When he and his friends escape from the hotel with Asma, their car meets with an accident. They decide to finish Asma and try to pass it off as a road accident. What happens next forms the rest of the film.

Deva Katta’s story is promising on paper as the film touches upon issues of how all is fair when it comes to politics. The Machiavellianism bit comes across well. Deva Katta’s screenplay (with additional screenplay by Farhad Samji) is also effective especially in the first half. But the film is devoid of entertainment in the second half and gets too violent. A few sequences are also unconvincing at this point. The pre-climax puts some things straight but the anti-climax finale spoils things. Farhad Samji’s dialogues are acidic and even clapworthy.

Deva Katta’s direction is quite simple and that works to an extent as the storyline is quite vast and complicated due to the presence of so many characters and the dynamics they share with each other. But one wishes he had done something about the finale as it’s the most disappointing part of the film. Also, audiences have seen films like RAAJNEETI, SARKAR, GANGS OF WASSEYPUR etc which are also based on corruption and bloodshed in politics and these films had far better impact. PRASSTHANAM pales in comparison of these memorable flicks.

PRASSTHANAM begins on a fine note showing the flashback and how the dynamics haven’t changed between certain characters over the years. The title track played during an action scene of the flashback is quite massy and would be enjoyed in single screens. The first half has some well written and executed scenes and has enough drama. The rape sequence and the aftermath is a shocker and makes for a great interval point. The second half is when things get really messy. The characters become sworn enemies of each other resulting in bloodbath. Sure there’s unpredictability but it’s get too much. There’s a solid twist in the pre climax that revives interest. However, shockingly the climax is absolutely thanda. One expects fireworks but it just ends on a tepid note. Single screen audiences, the target audience, will be expecting such an action packed film to end on a rocking note. But they surely would come out feeling dejected.

Sanjay Dutt gives a genuinely good performance and doesn’t go over the top. He keeps it restrained and it suits the character. Ali Fazal however steals the show. He gets the maximum screen time and he rocks the show. Jackie Shroff hardly has any dialogues but his screen presence is electrifying. The ‘Haji Ali’ track comes suddenly and seems weird to see a character run all the way from Uttar Pradesh to Mumbai. But Jackie’s performance saves the day. Manisha Koirala is decent but doesn’t have much to do. She’s like the silent observer and one surely expected more from such a dynamic performer. Satyajeet Dubey is great in the villainous role and oozes fear. Chunky Panday is passable. Amyra Dastur (Shivi) doesn’t get much scope. Chahatt Khanna and Divinaa Thackur do well. Other actors who leave a mark are Deepraj Rana (S P Narang), Zakir Hussain (Majid Maqbool) and Annup Sonii. Ishita Raj is smoking hot in the item number.

Talking of music, the title track is the most memorable. This is followed by ‘Haji Ali’ chiefly due to Jackie’s presence. ‘Dil Bevda’, the item song, is nothing great. ‘Charo Khane Chit’ is forgettable while ‘Dil Dariyan’ is wasted. Mahesh Shankar’s background score is dramatic.

Ravi Yadav’s cinematography is appropriate and the birds-eye shots of Lucknow are well captured. Abbas Ali Moghul’s action is a bit gory as per the requirement. Pallavi Bagga and Suman Roy Mahapatra’s production design is average. Priyanka Mundada’s costumes are straight out of life. Ballu Saluja’s editing is quite good in the first half especially.

On the whole, PRASSTHANAM rests on some great performances and a fine first half. But the second half and especially the lacklustre ending spoil the show. The buzz for the film is low due to which it will face a tough time at the box office.